Minister of Agriculture in the Nevis Island Administration and Area Representative for the St. Paul’s Parish the Honourable E. Robelto Hector

The exercises, which coincided with the National Heroes Day and Independence celebrations in September, formed part of the bank’s 30th anniversary events.

Serving as Area Representative for the parish of St. Paul and [as] the island’s Agriculture Minister, the Honourable E. Robelto Hector offered congratulatory remarks on the NIA’s behalf, adding that his ministry had benefitted, both directly and indirectly, from the operations of the financial institution.

Recognising that tree planting promotes “environmental consciousness,” the Agriculture Minister said he was pleased to be part of the exercise which was held at the Charlestown Secondary School.

The island’s Deputy Premier and Area Representative for the parish of St. John, the Honourable Hensley Daniel, joined the banking team when it later assembled at the Elizabeth Pemberton Primary School [EPPS] for a similar exercise.

“Good things are happening for you,” he said to the students who appeared excited about planting a lime tree at their school.

Noting that students at EPPS were benefiting from the NIA’s school meals programme, Minister Daniel said it was imperative that the students eat healthy lunches. 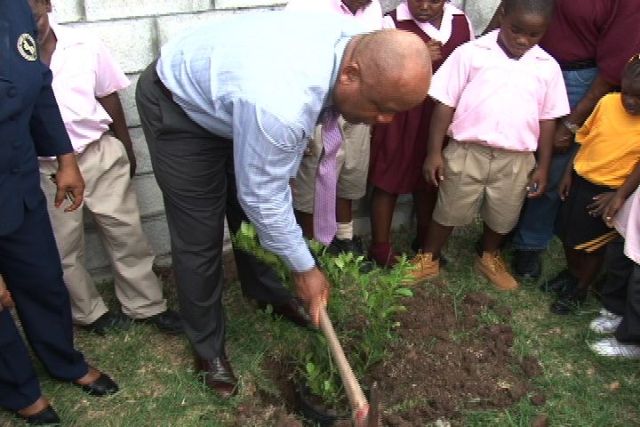 “This is an important exercise for all of you at the school. While we are offering lunch, we are also providing the means for you to have a sustained, nutritious lunch.

“If all of our institutions put a tree on the premises, you will surely have a good source of fruits and vegetables in the future,” Minister Daniel explained as he encouraged the students to “care for, nurture and enjoy” the lime tree.