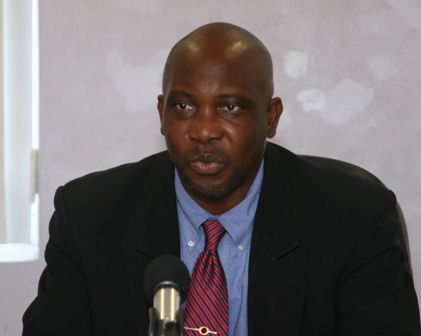 NIA-CHARLESTOWN NEVIS (February 09, 2011) — The person or persons responsible for the disappearance of documents from the Nevis Water Department, one of which was subsequently leaked to the media  recently, will face the consequences on conclusion of  an internal and or criminal investigation by the Police.

The Press Conference was convened by the Minister following the publication of a document in the local media and on the World Wide Web which sought to throw the quality of the public water supply in disrepute.  The document had originated from the Water Department’s Laboratory with regard to findings of a routine water quality test carried out at two week intervals that was specifically conducted in late December 2010.

“The first thing that we must assure you (media) is that we will continue to test the water. What we are doing in Nevis is no different to what they do in St. Kitts and our findings are no different to what you would find in open sources of water in the United States of America, in New York state where they have open sources of water, in nearby Antigua or anywhere close by.

“What we are going to be doing differently, we are going to ensure that we do an internal investigation and this is a matter which surely should be turned over to the Police for them to investigate as well because we take this very seriously in terms of leaking information to the media. Not only that, we take it very seriously that some of our files which contain information have gone missing. So it is a matter to be investigated both internally and by the Police,” he said. 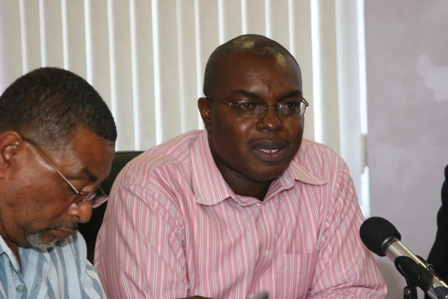 Permanent Secretary in the Ministry responsible for Public Utilities and the Environment in the Nevis Island Administration Mr. Ernie Stapleton at the microphone with Manager of the Nevis Water Department Mr. George Morris seated at his left

According to Mr. Powell, after the Salmonella story was refuted, a story of bacterial contamination in the water supply surfaced.

“I want to acknowledge as Permanent Secretary Stapleton that the report on the Internet appears to be a true and accurate copy of the report produced by our lab technician. That report was not posted by us nor was it given to any member of the media so we assert that it was stolen and passed perhaps by some corrupted government worker,” he said.

In his presentation, Mr Stapleton made clear the status of the document in question.

“I just want to let you know that that document is a leaked document. It is not a document that was given to anyone in the media by the Ministry of Communications and Works officially by the Water Department.

“In addition to that I was informed that there are some documents that are missing from the Water Department’s files concerning the subject area also and when these things happen I believe we are now moving into a different realm where the police should be involved,” he said.

However, the Permanent Secretary used the opportunity to speak of the Ministry’s confidence at the Nevis Water Department and their competence. He said they had been trained in the various areas of water production, quality, testing and had been exposed to international agencies.

“They practice their occupation following international standards and so I am fully confident that our professional staff is doing what they normally do with regards to the water quality issue.

“We are members of organisations that provide training on an ongoing basis and so we are fully exposed to all the various aspects to deal with water management and integrated water management resources here on the island of Nevis,” he said.

Meantime, Manager of the Nevis Water department Mr. George Morris explained that the document which had found its way into public hands was one of many that would normally be circulated within the department for the relevant action but it was not for public dissemination.

“It’s a document that we circulate within the Water Department it is not our policy or custom to give it to the general public.

It wouldn’t have been our policy to…because once we find out [contents of the report], we will treat the water. I don’t think in any other water utility in the Caribbean that they publish these things. It’s what they do when they find them [that matters] it is [a measure put in place] to make the water safe and we administer treatment. If the findings are high the level of treatment would go up, if it’s low it would go down and the main treatment that is administered to water for purification is chlorine,” he said.