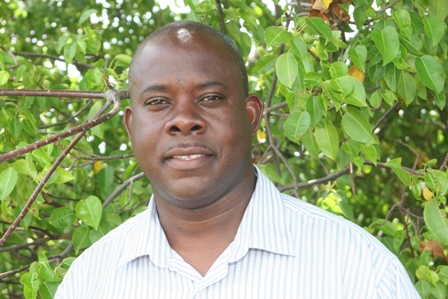 Minister of Agriculture in the Nevis Island Administration Hon. Robelto Hector at the government owned farm at Indian Castle

He said the over 30 acre plot will be shared with members of the Nevis Sea Island Cotton Producers Cooperative (NESICOPS) will yield more cotton and bring better returns to the island’s economy.

Mr. Hector told the Department of Information during a recent visit to the farm, that although replanting of a new crop of Sea Island Cotton had been delayed due to inclement weather and installation of the irrigation system, it was worth the wait.

He said Nevis had played a leadership role in agriculture in the region and that the Indian Castle farm would become a demonstration plot which would draw interest from locals and visitors.

The Agriculture Minister said the NIA had supported the funding from the Japan Grant Assistance for Grass Roots Human Security which made the irrigation system a reality. He said the Japanese Government had given the farmers of Nevis a chance to show their true potential and it was an opportunity that would be maximised.

Meantime, Mr. Hector said he had no regrets with the earlier decision to reintroduce cotton cultivation on Nevis and it formed part of the NIS’s plan for the economic development of Nevis

“Agriculture governance [and] development needs vision and hard decisions. It is a situation in which having made a hard decision, recognising that you have a vision; we are now showing the sceptics what we are talking about in terms of agriculture development.

“It is not going to be easy but on the shoulders of the Department there is going to be a great responsibility to organise and make sure that farmer’s confidence is kept at the highest level…I can tell you in the future, we are going to have other Caribbean Islands, just like the Four Seasons Model, looking towards a project that could be a pioneering project that they can learn from,” he said. 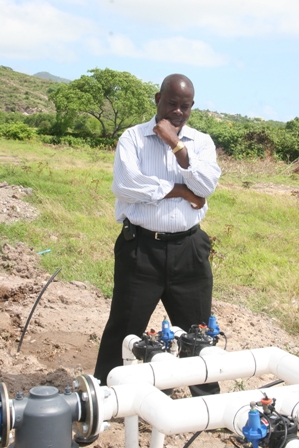 With regard to the number of farmers who had undertaken cotton cultivation in recent years, Mr. Hector said he was satisfied. The establishment of a cotton farmer’s cooperative, he explained, would assist with the mobilisation of farmers and push cotton production in the planned direction outlined by the Ministry and Department of Agriculture.

However, Mr. Hector used the opportunity to encourage other farmers to take advantage of cotton cultivation which he said had good financial benefits.

“This [Cotton] is an export crop, it is an export crop that brings in money; this is a crop that assists us [NIA] in our Balance of Payments. Little Nevis is not known to produce much but its people, we have to look in terms of getting something on the international market that brings us revenue and in that way it would enhance our development.

“So my encouragement to new farmers is, here is an opportunity, cotton is being sold at a premium price and it’s an opportunity that you must avail yourself off,” he said.

Looking to the future of cotton cultivation on Nevis, Mr. Hector explained that the Taiwanese had already been approached for their assistance to place a water well at the Indian Castle farm for irrigation purposes.

The Minister said at present water used to move the new irrigation project would be drawn from the island’s domestic source without any interruption of service to consumers in other parts of the island.

He said it showed the direction and foresight on the part of the NIA, who had increased the number of water sources and the availability of water to residents throughout the island.

“What we are having here is actually forward thinking. Having a well in this area would give us water that we can use. We heard of the hotel project that was coming here, here again forward thinking, you have a source of water that you would be able to make sure that the irrigation supply, the domestic supply within this country is actually growing at the same pace of our development.