Premier and the Four Seasons team in conference

(Charlestown,Nevis–Wednesday, September 29, 2010) Premier of Nevis, Hon. Joseph Parry told the Department of Information on Wednesday, that Nevisians can soon look forward to the re opening of the flagship of  Nevis Tourism, the Four Seasons Resort.

A meeting between members of the Nevis Island Administration (NIA) and the Four Seasons Resort Corporation was held at the Ministry of Finance Conference room on Tuesday, September 28th, 2010.

A number of important matters pertaining to the reconstruction of the Four Seasons Resort property were discussed. It was noted that the re opening date is 78 days away.  However, all parties expressed confidence that the re opening date would be met. In this regard there was need for close cooperation between the NIA and the contractors involved in the reconstruction process.

The Four Seasons Resort owners and associated parties were assured of the government’s commitment to assist in areas such as customs facilitation and the speedy processing of work permits. 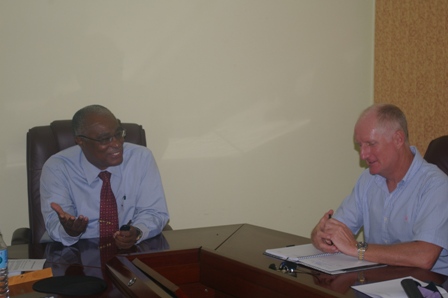 The General Manager, Mr. Andrew Humphries stated that interviews for employment of the Four Seasons Resort-Nevis would be carried out in early October while the hiring process would take place in November.