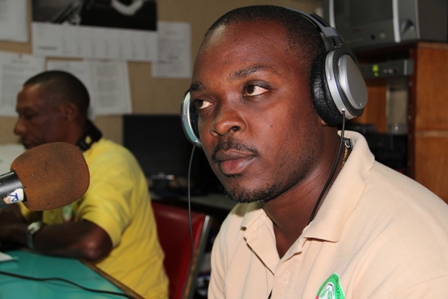 Agriculture Supervisor at the Department of Agriculture on Nevis Mr. Randy Elliott

NIA CHARLESTOWN NEVIS (March 14, 2013) — Agriculture Supervisor at the Department of Agriculture Mr. Randy Elliott said the agricultural produce that would be on display at the Agricultural Open Day on March 21 and 22, 2013, would not truly reflect the early dry weather conditions on Nevis over the past month.

Mr. Elliot’s comment came while he was a guest on “On the Mark” programme on VON Radio on March 12, 2013. He along with the Department’s Chief Extension Officer Mr. Walcott James were discussing with the Show’s host, Minister of Agriculture Hon. Alexis Jeffers, matters related to the Department’s annual agricultural fair.

“Some farmers willingly came on board and some farmers were forced to come on board based on the weather conditions but 99 percent of the farmers on Nevis have been using the technology that we have been transferring to them and next week will be a testimony of all that,” he said.

Mr. Elliott explained that the weather had been quite different this year because the dry season had set in earlier but through modern technology, the area of livestock production was also benefiting.

“We at the Department have been trying to transfer as much technology to farmers as possible. One of the things we are pushing this year and this year is probably one of the best times to push it, is when you look at the livestock sector we are actually going into forage banks.

Meantime, Mr. James added his remarks to that discussion and stated that most of the agriculture on Nevis was under drip irrigation. He noted that farmers had also been advised by the Department to utilise low tillage and coupled with the drip system the farmers had been having good results. 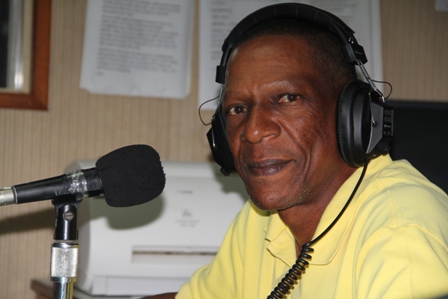 “Though the weather is not the best, the farmers are still being able to produce a massive production of products. At this moment so far from January to present, we have a sustainable production of tomato. So far all tomato you see in the supermarkets, restaurants and the hotels are locally produced.

“Right now we have an abundant production of pumpkin even under this [dry] weather. So therefore when the farmers use the technology that has been discussed with them and transferred over the years it makes it possible. Even in the most difficult weather we want to push forward, which is a tremendous advantage, that we have over our sister island in St. Kitts,” he said and added, “Yes the weather has been bad for the last month, there was basically no rain but still … next week we will demonstrate to the general public, that we are still able to produce a significant amount of fruit on the island.”