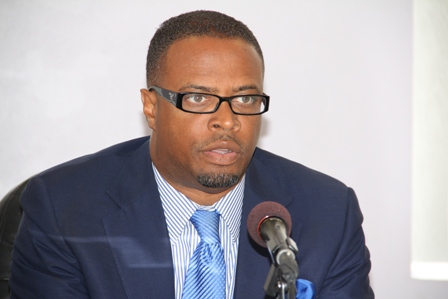 On his return to Nevis, Mr. Brantley who led a two member delegation from the Ministry of Tourism to the Sea Trade Cruise Conference told the Department of Information on March 15th, 2013 that during the Conference they were afforded the opportunity to hold some useful meetings.

“All in all, I feel that the trip was very successful. For me it was an effort to familiarise myself with the cruise industry. Nevis as we all know is not a major cruise destination and we want it to stay that way… We met with Celebrity Cruise Lines, we met with Royal Caribbean Cruise Lines and we met with Azamara.

“Azamara is of particular interest to us because it is a luxury brand of Royal Caribbean and so the idea behind meeting with them is because Nevis is promoting itself as a premier destination. We are seeking to attract the higher end niche of the cruise market, the small ships, the luxury brands and so Azamara took a meeting with us and we are very, very grateful for that,” he said.

According to Mr. Brantley, the Azamara had already made calls to Nevis and the most recent was two weeks ago. He expressed hope that it would make Nevis an integral part of its itinerary.

Discussions were also held with officials from the Windstar, another luxury brand cruise line.

“We also took the opportunity to continue discussions with another luxury brand called Windstar. Windstar was here recently their representatives were on St. Kitts and came over to Nevis. I met with them briefly and officials here from the Ministry of Tourism took them on an island tour.

“Windstar is a brand that we are keenly interested in, they have expressed a very, very keen desire to come to Nevis because they see Nevis as affording their clientele the upscale destination that they are looking for and so we took a meeting with them which went extremely well,” he said.

Mr. Brantley further noted that he had also used the opportunity to meet with renowned Tourism Consultant Dr. Auliana Poon who was currently conducting a consultancy for the St. Kitts Tourism Authority.

“On the sidelines I also spoke to a Dr. Poon, she is a Consultant who is currently basd here on St. Kitts primarily with looking at sustainable tourism. She was there and we took a meeting with her which I thought went really well in terms of laying out the vision for Nevis and what we as the Ministry of Tourism and I as the new Minister of Tourism am seeking to do.

“Dr. Poon will be visiting the Federation in the next few days and we hope to continue that discussion. [Our] hope would be that her mandate for St. Kitts, we can get that expanded, so she could also do some consulting work on Nevis,” he said.