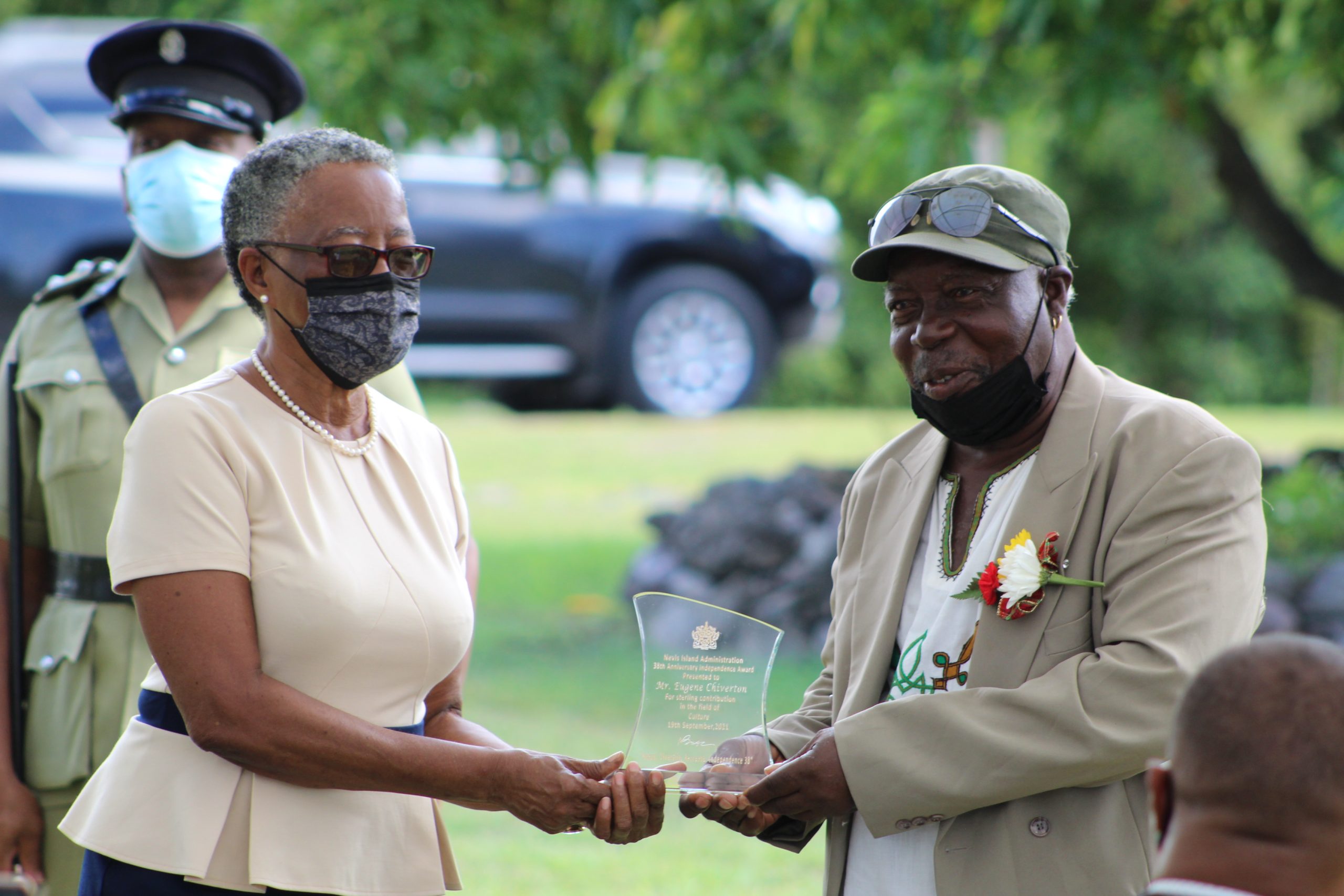 Mr. Eugene “Chevy” Chiverton of Brown Hill Village receiving a plaque in recognition of his contribution in the field of Culture from Her Honour Mrs. Hyleeta Liburd, Deputy Governor General in Nevis at an Awards Ceremony on September 20, 2021, at Government House on the occasion of the 38th Anniversary of Independence of St. Christopher and Nevis

NIA CHARLESTOWN NEVIS (October 07, 2021) — Mr. Eugene “Chevy” Chiverton of Brown Hill Village was honoured in the area of Culture at the recent celebration of the 38th Anniversary of Independence of St. Christopher and Nevis.

He was one of 11 Nevisians presented with a plaque by Her Honour Mrs. Hyleeta Liburd, Deputy Governor General in Nevis, during an Awards Ceremony on September 20, 2021.

In his profile, it was said that Mr. Chiverton caught the music bug in the 1970s while residing in Statia. Noting his fledgling talent, bandleaders encouraged him to sing, and he became a vocalist for two local bands – The Crazy Cats and The JB’s. Both were on the hotel circuit, as well as in St. Maarten, St. Barths, Aruba, Curacao and Holland.

On his return to Nevis in 1979, Mr. Chiverton linked up with the Soul Survivors band led by Mr. Elroy Swanston, and produced the jumpy soca song “Nevis Action”, which became an instant local hit. The song was later recorded at the Ochoa Studios in Puerto Rico.

At that time, he also opened the first T-shirt print store in Nevis, inclusive of a fashion and music store, featuring trendy clothing and all genres of music.

Buoyed by his early success, Mr. Chiverton contacted the Mighty Arrow of Montserrat, whose popular calypso anthem and dance floor hit, “Hot-Hot-Hot” had been rocking the world, for advice on becoming a more professional artiste. The Soca King pointed him to Professor Arthur “Art” De Coteau, a prolific Trinidadian calypso and soca musician, and arranger.

Chevy travelled to Trinidad, and met with the ‘music maestro’ at the Hilton Hotel and the rest was history. Their collaboration produced “Rasta Man Jam”, “Maria-Do-Do”, “Ge Me More” and “Rosalie”. “Maria-Do-Do” became no. 1 in St. Marten, and remained at the top of the charts for months.

In 1982, Chevy travelled to New York City for the Labour Day weekend, and performed “Ge Me More” and “Rosalie”, with “Ge Me More” becoming no.1 on Eastern Parkway.

With soaring popularity, Chevy performed across the US Eastern Seaboard in cities like Baltimore, Maryland, and New Haven, Connecticut, sharing the stage with the likes of Mighty Sparrow, Mighty Arrow, Baron and Scrunter.

Back in the Caribbean, he performed alongside the Mighty Arrow in front of a sold-out crowd, at Sturge Park in Montserrat. His performances were always interspersed with his signature “Nice Man!”

Looking for new challenges, Chevy moved to the United Kingdom in 1983 and spent 18 years there. Living in Leeds in the north of England, he became an integral part of the Leeds West Indian Carnival, among other things, helping to initiate J’ouvert morning. He was also the perennial Master of Ceremonies for the annual calypso show, and was a popular radio DJ.

Chevy performed in many other major UK cities, including London, Birmingham, Liverpool, Manchester and Leicester. “Ge Me More” was adopted by a subsidiary of the famed Island Records the label which signed Bob Marley and the Wailers, featuring the song regularly on the popular Radio 1.

Besides providing thrilling stage entertainment over the years, locally, regionally and internationally, the versatile ‘Ge Me More’ artiste, has operated the Sand Dollar Bar on Jessups Beach, and Chevy’s Bar on Pinney’s Beach. Chevy is presently working on his first album after a number of years.