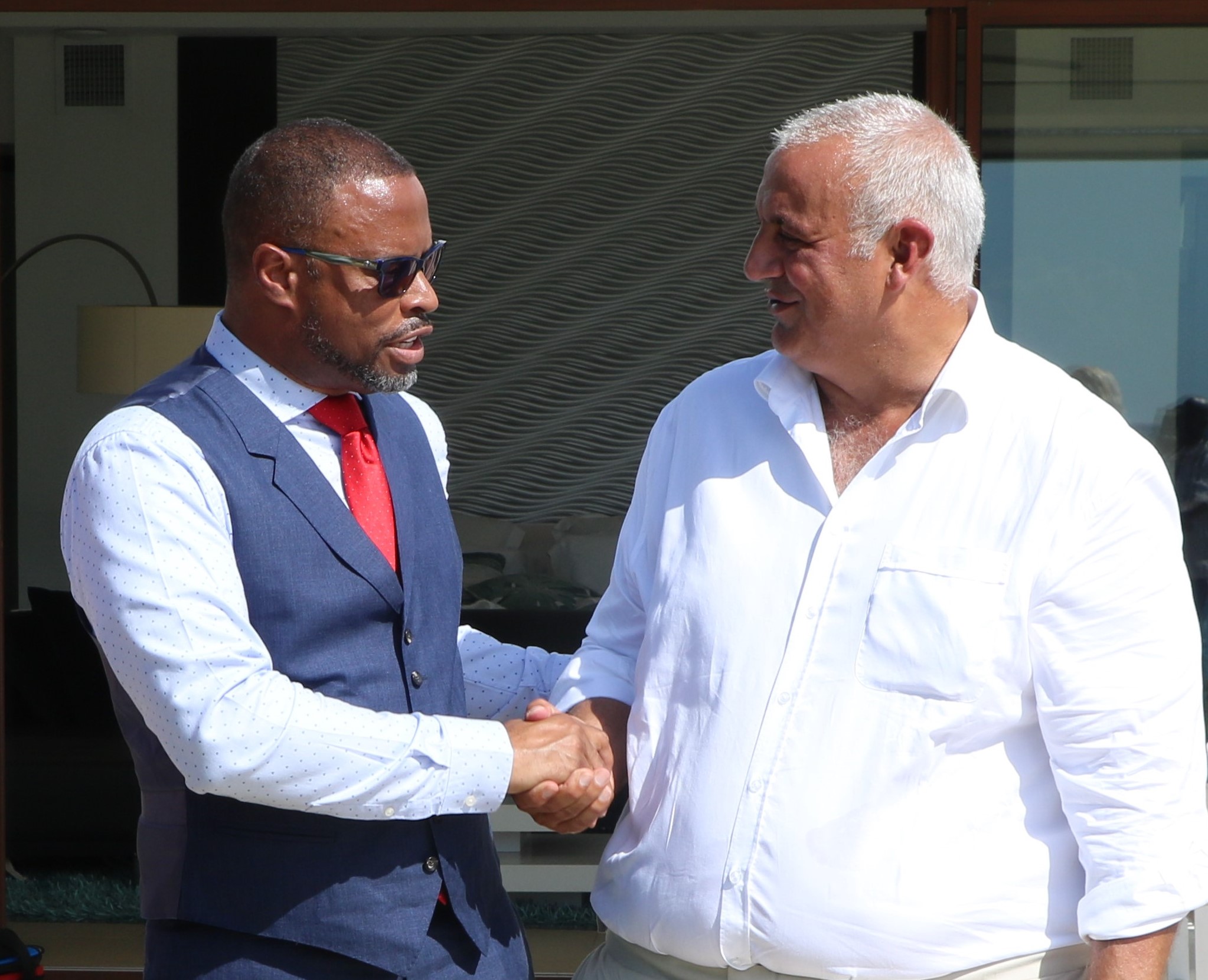 Premier Hon. Mark Brantley, Minister of Tourism and Foreign Investment in the Nevis Island Administration with Mr. Philippe Martinez, MSR Media producer and director on the set of the comedy “One Year Off” at Chrishi Beach Club, Nevis, February 2021.

NIA CHARLESTOWN NEVIS (March 24, 2021) – – The efforts of the Nevis Island Administration (NIA) to launch a film industry on Nevis continues to pay dividends as MSR Media has announced April 15, 2021 as the start date to begin filming a second successive movie on the island.

“I am excited that MSR Media has completed its first film here on Nevis and is due to start its second film shortly. This is consistent with the commitment made by MSR Media to my government as we work together to diversify the Nevis economy and create a film industry for the island of Nevis and the wider Federation,” he said during an interview with the Department of Information on March 24, 2021.

Mr. Brantley, who is the Minister of Finance in the NIA, highlighted the economic boost to St. Kitts and Nevis and the transfer of skills for locals resulting from the government’s partnership with MR Media.

“I am also delighted that scenes for this movie will be shot on our sister island of St. Kitts so that our brothers and sisters on St Kitts can be a part of this incredible new industry, and witness first-hand the benefits to be derived from the film industry.

“This is a manifestation of the vision of this CCM-led government and I am delighted to spearhead this effort as Premier of our beloved Nevis,” he said.

According to Mr. Philippe Martinez, MSR Media producer and director, the UK-based company is wrapping up filming “One Year Off”, on Friday, March 26, 2021.

“This movie finishes on Friday and on April 15 we are starting to produce a new movie with Tom Paton.

“He is going to direct the movie “Assailant” which is a thriller,” he revealed at a media briefing on March 21, 2021.

Mr. Martinez told the Department of Information he is eager for cameras to roll on the second movie the company is filming on Nevis.

“I am very excited about “Assailant”, MSR Media’s next production.

“Tom Paton is a young, talented British director who has created a very suspenseful thriller, taking advantage of all of the natural cinematic beauty of Nevis,” he said.

As part of the NIA’s progressive agenda to diversify the Nevis economy in the face of the COVID-19 pandemic, the government entered into a partnership with MSR Media in January 2021 for an initial two-movie production deal.

Soon after the cast and crew of the comedy “One Year Off” began filming on the island, Mr. Martinez announced that MSR Media would be filming a total of six movies on Nevis over the next year.

“So our plan is to make six movies. Actually I believe it has already been discussed with the government [NIA]…

“We only have one real problem, which is very challenging for a producer, the actors don’t want to leave [Nevis]; they want to stay here.

“We love it here, and that’s because you have made us feel very welcome,” he said.

“One Year Off”, the first movie to be produced entirely on Nevis was filmed at various locations on the island including Chrishi Beach Club, Golden Rock Inn, and the world renowned Sunshine’s Beach Bar and Grill on Pinneys Beach.