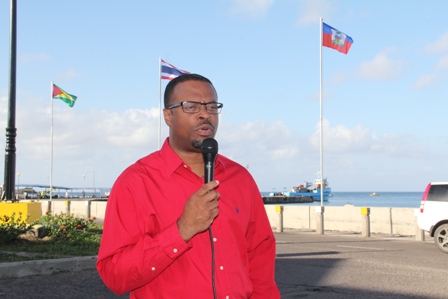 Deputy Premier and Minister of Tourism in the Nevis Island Administration Hon. Mark Brantley
NIA CHARLESTOWN NEVIS (February 14, 2014) –Deputy Premier of Nevis and Minister of Tourism Hon. Mark Brantley has asked the public on Nevis to bear with the ongoing works at the Charlestown Waterfront on Samuel Hunkins Drive, as work continues apace with the ongoing beautification of the area.
Mr. Brantley who stood in for Hon. Alexis Jeffers, the Minister responsible for Communications and Works, made the comment when he spoke to the Department of Information on February 14, 2014, on Samuel Hunkins Drive, while a number of flags were being hoisted. 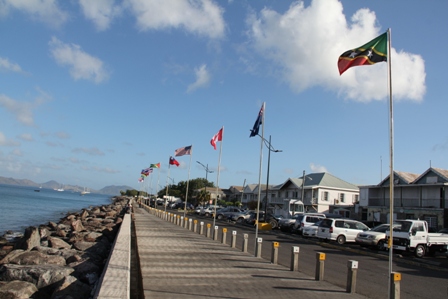 “We have many nationals living here. We want them to see their flags reflected so that they could understand that they are welcome in Nevis. They are an integral part of what we are doing to build this nation and we feel at the same time it lifts the waterfront considerably, especially as one approaches Charlestown from the ocean.
“There will be some additional works happening very soon and we just ask the public to bear with us as we do what we do to try and make things better and make this waterfront a far more attractive waterfront for them and our visitors… What we are doing now is mounting some flags of different nations along the waterfront as part of the process,” he said. 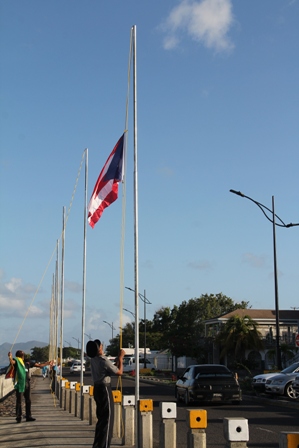 The beautification project which will cost the Nevis Island Administration in the region of EC $100,000 commenced in January, 2014, with assistance from the Government and people of the Republic of China (Taiwan), the Ministry of Tourism and the Nevis Tourism Authority.
Construction work on the project which is expected to be completed by the end of February is being conducted by private contractors and the Public Works Department in the Nevis Island Administration’s Ministry of Communications and Works.