Minister of Culture in the Nevis Island Administration Hon. Mark Brantley handing over the keys of a new Toyota bus to Chief Executive Officer of the Nevis Cultural Development Foundation Keith Scarborough while the Foundation’s staff looks on June 11, 201
NIA CHARLESTOWN NEVIS (June 11, 2015) — Chief Executive Officer (CEO) of the Nevis Cultural Development Foundation (NCDF) Keith Scarborough gave a commitment to Minister of Culture Hon. Mark Brantley, that his staff would care of a new Toyota bus in their continued promotion and preservation of Nevis’ culture.
Scarborough was at the time delivering remarks at a brief handing over ceremony, after he received keys to the vehicle from Mr. Brantley outside the Foundation’s office on June 11, 2015.
He stated that the Foundation had been without a vehicle for some time and thanked all who made the gesture a reality. The CEO also used the opportunity to thank the Ministry of Health, who he said had assisted the Foundation with a vehicle in its time of need.
Mr. Brantley, in remarks said the Ministry was able to deliver the vehicle through the Nevis Island Administration and a partnership with TDC.
He noted that the Foundation played a vital role in the development of Nevis and described the handing over as significant. 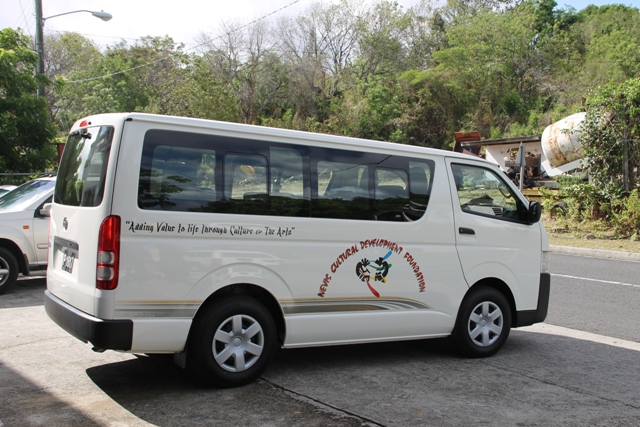 “The Foundation of course is involved in promoting, preserving and advancing the culture of Nevis and as a result they do a lot of work in the schools, they do a lot of work in the communities.
“They have to take people around, transport children and staff as well and it gives me great delight as the minister, to hand this bus over and to ask them to put it to good use in the advancement of culture for the people of Nevis,” he said.
Also present at the ceremony were Permanent Secretary in the Ministry of Tourism Carl Williams and the Foundation’s staff.