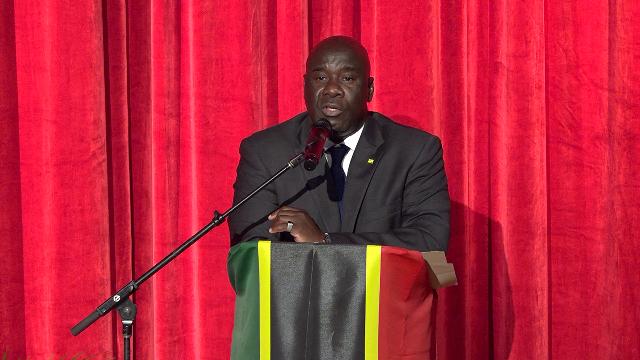 Hon. Alexis Jeffers, Deputy Premier of Nevis and Minister of Agriculture in the Nevis Island Administration making his presentation at the opening ceremony of Agenda 2019, hosted by the Ministry of Agriculture at the Nevis Performing Arts Centre on January 21, 2019

NIA CHARLESTOWN NEVIS (January 22, 2019) — Hon. Alexis Jeffers, Deputy Premier of Nevis and Minister of Agriculture in the Nevis Island Administration (NIA) believes that the one-day consultation for stakeholders in the agriculture sector on Nevis on January 21, 2019 has met its intended objectives.

The minister’s response came when he spoke to the Department of Information on January 22, 2019, one day after the Ministry of Agriculture hosted the forum dubbed Agenda 2019 at the Nevis Performing Arts Centre (NEPAC). The theme for the conference was “Securing the food and nutritional needs of our island.”

“I am of the view that the event met its objectives in that, the myriad of challenges facing the sector were discussed and the successes of the Department [of Agriculture] and the sector as a whole were also highlighted.

“Both the challenges and successes coupled together has given us an idea as to where we are with the sector and the plans, programmes and policies that have to be implemented to further strengthen the sector,” he said.

The minister noted that the forum outlined the vision for the Ministry and Department of Agriculture in an effort to ensure that the sectors is in a position to make a significant contribution to the island’s economy and its people now and into the future.

In his presentation at the opening ceremony, Mr. Jeffers urged those present to assist meaningfully.

“This activity today is about accountability for you to know what we want to achieve and the resources available for us to meet the goals we have set for ourselves. We brought you here today because we need your assistance, your support and feedback to ensure we are on a track that would benefit our homes, hoteliers and restaurants, hospital, our school meals programme and other industries involves in the provision of food,” he said.

The Agriculture Minister reminded the participants that historically, agriculture was at one point the leading sector on Nevis and believes that it could happen again.

Notwithstanding, Mr. Jeffers noted that over the last four years in particular, the NIA has been slowly working on the necessary infrastructure and mechanisation of the Department of Agriculture to improve service delivery to farmers and other primary producers on the island.

Regarding the issue of government lands leased to farmers, the minister explained that because the returns have not been satisfactory, a decision was taken to revamp the land lease policy.

The new five-year lease gives farmers security of tenure and some measure of equity which allows them to approach lending institutions for assistance with their farming. It also has a number of conditions which seeks to ensure that lands are used for farming.

Mr. Jeffers said the administration believes that farming is a lucrative economic activity and persons should invest in their farms by approaching lending institutions as opposed to looking for hand-outs especially as start-up costs could be significant.

When lands are leased to livestock farmers, they are encouraged to engage in semi intensive farming in an effort to reduce the land space needed. As it relates to meat quality that type of farming is the better option.

He also thanked the allied agencies for their continued invaluable assistance to the agriculture sector on Nevis.

In conclusion, the Agriculture Minister told the stakeholders that the image of agriculture is still looked at as back breaking and labour intensive work. However, the time has come to change the cultural stigmatization which no longer applies to modern agriculture.

Mr. Jeffers assured that with available human resources and constant training, the transfer of knowledge to farmers will occur and consequently positively impact the various estates and farms.

“At this stage of our development on the island, agriculture is in a position to be our saviour…I therefore urge all of us to do our part to ensure that we prosper as a nation,” he said.

Among those present at the opening ceremony were Hon. Mark Brantley, Premier of Nevis and Hon. Spencer Brand.