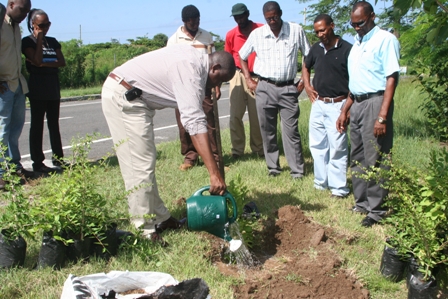 Minister of Agriculture Hon. Robelto Hector watering a Jujube tree moments after planting, the first of many fruit trees along the Pinneys Bypass Road, in celebration of the 30th anniversary of World Food Day on October 16, 2010. Looking on from left are: Permanent Secretary in the Ministry of Agriculture Dr. Kelvin Daly, Chief Extension Officer Mr. Walcott James, Director of Agriculture Mr. Keithley Amory and other members of staff from the Department of Agriculture

CHARLESTOWN NEVIS (October 13, 2010) — As part of the activities to mark the 30th anniversary of the Food and Agriculture Organisation’s World Food Day on October 16th, 2010, under the “United against Hunger” the Ministry and Department of Agriculture on Nevis carried its fruit development initiative along the Bypass Road at Pinneys.

Agriculture Minister in the Nevis Island Administration (NIA) Hon. Robelto Hector planted the first fruit tree on Tuesday in keeping with the theme which he said would provide free fruit for persons who traversed the area.

“So in saying happy World Food Day to everyone on this the 30th anniversary, I would want to encourage Nevisians to do as the Department is doing – plant a tree all food crops. It can be that part of your life in the future,” he said. 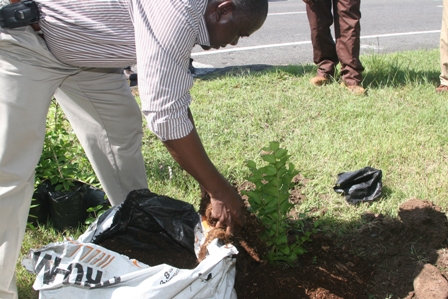 Minister of Agriculture Hon. Robelto Hector placing mulch around the Jujube tree he planted moments before along the Bypass Road in Pinneys

Mr. Hector said he wanted it understood, that the tree planting exercise must not be taken lightly. He explained that the gesture was deeply rooted in the global programme toward food production, nutrition and to combat the crisis of world hunger.

Meantime, Mr. Amory said the initiative was in line with this year’s World Food Day theme “United against Hunger”.

“The reason why we are planting fruit trees is that most persons tend to walk along this route and we are hoping that when these trees start bearing they would provide fruits to give energy to those walkers.

“It is also united against hunger that it would provide free fruits, something that we are trying to promote here in Nevis,” he said.

In an invited comment, Dr. Daly said the activity fitted into the overall fruit development programme of the Department of Agriculture which commenced two years ago, with a 10 acre orchard at New River which was nearing completion.  The first fruit tree there was also planted by Minister Hector and the Department had already began to benefit from harvests.

“It has in there types of citrus, mangoes, guava, jujube, cherries, cashew and coconuts. So this idea here is a continuation of that and since this project in New River has started two years ago the work continues.

“This is just another step in the direction of making sure that the island has fruits available and this time free of charge for anybody who sees fit to come and pick when they are mature,” he said.

Other activities for the week include a distribution of fruit baskets to 30 persons around the island on Wednesday; planting of seeds for future distribution free of cost on Thursday and an Intercultural Food Fair at the Charlestown Waterfront on Friday.  The week of activities will conclude on Saturday with a health walk which will commence from the Artisan Village through Pinneys up the Bypass Road and onto Pump Road. Then back to the Island Main Road to Charlestown and end at the starting point.