CHARLESTOWN NEVIS (September 24, 2010) — Minister of Agriculture on Nevis Hon. Robelto Hector, had words of praise for staff of the Department of Agriculture for their innovative work to improve the quality of livestock at the Nevis Island Administration (NIA) owned farms.

Mr. Hector’s commendation came when he visited the Indian Castle livestock Farm on Wednesday. He said though the agriculture sector on Nevis had been adversely affected by the persistent drought conditions that had affected the island, the livestock at the stock farm remained in top condition.

“We are to commend the workers on the estate for their diligence and making sure that the effort in feeding Nevis and creating a meat product is alive and well here at Indian Castle. 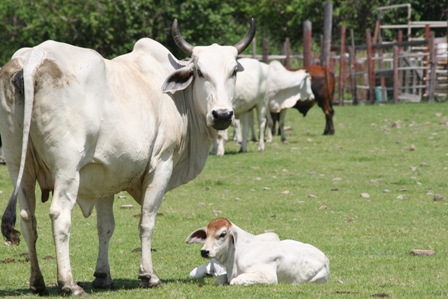 “I am happy that here is a mixture in the herd due to the innovative work done by the Department as well. I always remember my Cabinet Colleagues teasing me about that bull coming out of St. Croix. The bull is here and its working and we can definitely see the transformation within the herd,” he said.

Meantime Permanent secretary in the Ministry of Agriculture Dr. Kelvin Daly who also accompanied Mr. Hector explained that about 1 ½ years ago a cross breeding programme was introduced with the Senepol bull and Brhaman females which had resulted in a good and faster growth rate than the separate breeds. 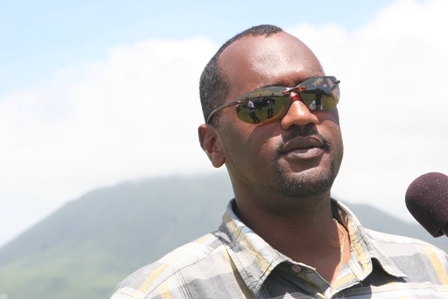 “Right now we have animals about a year and change and are already pushing 600 pounds and so this little experiment goes a long way in trying to show us the direction we need to go in terms of using the space to produce maximum amount of beef which is the main objective here,” he said.

However, Dr. Daly said the Department was willing to share its success with other livestock farmers on the island. He said they could visit the farms to get a firsthand look of the results and if they were interested could purchase one of the animals from the breeding programmes at the Indian Castle or Maddens Livestock farms. 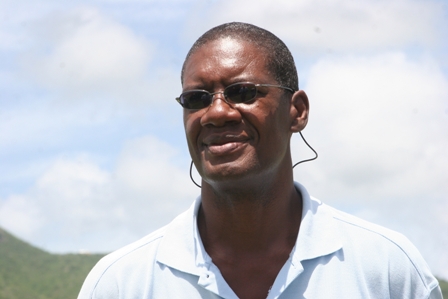 Director of Agriculture on Nevis Mr. Keithley Amory who was also on the livestock farm tour explained the profile of the herd and said the expectation was for an increased stocking rate.

“We have about 75 animals inside here with 30 cows. Those are the ones that have already reproduced and we have five young bulls and two major bulls It is now carving season and we are hoping that all 30 cows would already hold and we are expecting roughly around 30 calves but on an average we may get 20.

We are also hoping that some of those heifers have mated for the first time and would give us some calves this season,” he said. 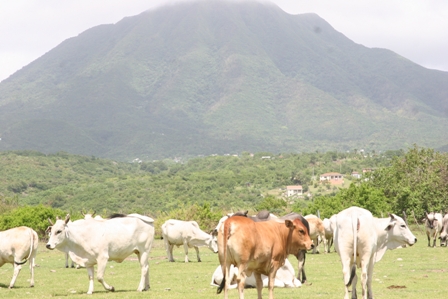 Mr. Amory also noted that apart from the expected improved meat quality, the programme was also geared toward injecting some calmness in the herd.

“So we are expecting a good stock in density and also improved meat quality as well,” he said.