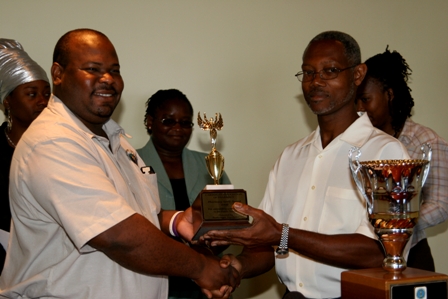 During the ceremony, executive member of CAP Mr. Rohan Claxton announced that Mr. Nisbett had won the Caribbean Spirit Award 2008 trophy donated by Boehringer Ingelheim and three nights of free accommodations at the Association’s next annual convention in Dominica in 2009. He also explained the basis on which the winner was selected.
“The nominee must be a registered pharmacist working in the hospital system in the Caribbean or a hospital, clinic or pharmacy institution in the private sector providing pharmacy service to the Caribbean people. He should also be a member of the Caribbean Association of Pharmacist or have such a pharmacist in its employ.
“He should also be a member of a professional organisation that represents pharmacy; be making an outstanding contribution to the practice of pharmacy in the place of employment or engage in outstanding service delivery; be recognized as an integral part of the health care team; exemplify equity, access, honesty, caring and adherence to the laws in the delivery of the service to the public,” he said.
Meantime, a surprised Mr. Nisbett accepted the award with grace and thanked CAP for the recognition. However, he took the opportunity to urge Science students on Nevis to pursue studies in pharmacy since there was a need on the island for pharmacists.
“I would like to say thanks also to the Caribbean Association of Pharmacists for seeing me fit to receive this award here today and I will try my best to set an example. I would also like to ask those who are still in school and who are doing science subjects to try and focus on the needs of the country, rather than just trying to be doctors and lawyers and make a lot of money in the short term.
“We need pharmacists and I am pleading with them to consider going into pharmacy and making a contribution to the community,” he said.
Notwithstanding, Mr. Nisbett described himself as one with humility the same as he had when he started in the profession several years ago as a student pharmacist/dispenser.
“I can say that I am still the same person I was more or less when I started because I still have my humility. I don’t think I am any great person and I can say from the bottom of my heart, that I truly appreciate this acknowledgement.
“It is really an acknowledgement of pharmacy in St. Kitts and Nevis and I can say that I am grateful to receive this on behalf of my fellow pharmacist and in memory of Mr. Hugh Claxton as well who was there when I started. I don’t know if I have truly done anything great, I have tried to do my job with what I have and I will continue for I don’t know how much longer, I could be honest, but I shall try my best,” he said.