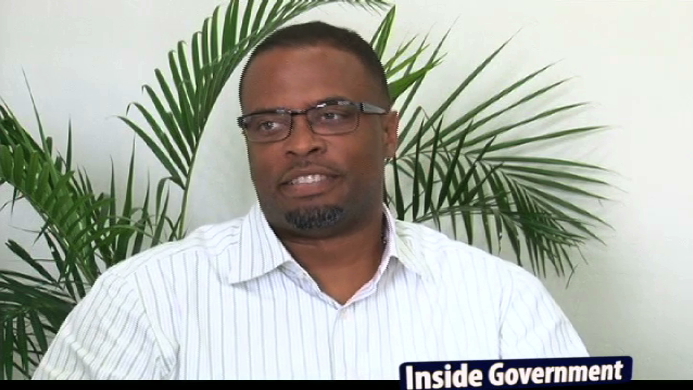 Deputy Premier of Nevis and Minister of Tourism Hon. Mark Brantley a guest on NTV8’s Inside Government programme aired on November 11, 2013
NIA CHARLESTOWN NEVIS (November 14, 2013) — Club Med marked the opening of the 2013-2014 Nevis cruise season, when the vessel arrived on November 09 with 386 passengers. The vessel will make two more visits to Nevis from the 29 calls expected from a total of eight vessels during the season, which is scheduled to bring some 8,124 visitors to the island.
Deputy Premier and Minister responsible for Tourism on Nevis Hon. Mark Brantley, while a guest on Inside Government aired on Nevis Television 8 (NTv8) on November 11, 2013, described the number of vessels expected to call on Nevis, as a far cry from that of years past.
“This season we [will] have some 29 calls so far from cruise ships. It really is a far cry from where we would have been in the past but we appreciate the difficulties that we had.
“We feel that to get 29 calls now, as we are trying to rebuild this sector, bearing in mind that we do not have the physical infrastructure – the cruise ship berth, the piers and the like, so we have really gone out to try and track smaller ships which have to tender in,” he said.
According to the 2013-2014 cruise schedule made available by the Nevis Tourism Authority (NTA), Azamara Quest, the vessel with the largest capacity of 694 passengers will visit Nevis three times for the season with its inaugural call on December 03, 2013. The other vessels which are expected to visit the destination are Sea Dream II, which will make two calls, with a capacity of 110 passengers; Star Clipper with 170 passengers will make eight calls; Seabourn Pride with 208 will call five calls and Sea Cloud with 94 passengers will make one visit while Windsurf will overnight with 310 passengers during its five expected calls.
However, Mr. Brantley explained the NIA’s position on the matter.
“The idea behind cruise and the position we have taken as to cruise is that we do not see cruise as an end in itself. We see cruise as a window of opportunity, a way that we market our land-based tourism,” he said.
The Tourism Minister also used the opportunity to urge persons involved in the sector to avail themselves of the opportunity to make money during the season.
“Cruise for us has started. I am asking our people to put themselves in a position where they can benefit… I am asking our taxi operators, our vendors, our craft and arts people.
“We have sought to spruce up the Heritage Village; we have spruced up the Artisan Village, we are going to be doing some additional work at the Artisan Village because the idea is to have some place where these passengers, these tourists when they get off the ships, we have some place where our local people can have a captive audience in order to make some money,” he said.
Meantime, in response to what his vision for tourism on the island was, Mr. Brantley responded that it was as simple as more money in the pockets of stakeholders.
“My view in relation to tourism as I keep saying is very simple. If I can, through our efforts at the Ministry [of Tourism] and the NTA put more money in the pockets of our people, then I believe that’s successful.
“I don’t have very lofty ambitions; my ambitions are really achievable in my view. If at the end of this season the taxi men and the vendors and restaurateurs and hoteliers and the farmers and all the allied people can say to me they had a good season, meaning they have more moneys in their pocket then I feel that we would be doing a good job,” he said.