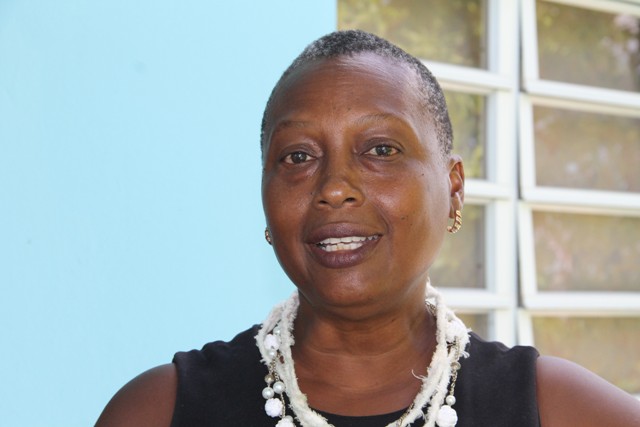 Deborah Tyrell, Chairperson of the 2016 Culturama Central Committee
NIA CHARLESTOWN NEVIS (August 15, 2016) — Chairperson of the Culturama 2016 Central Committee Deborah Tyrell says the Culturama Festival continues to be a safe event.
Tyrell made the comment in response to an invited comment, when she spoke to the Department of Information on August 15, 2016. It is the second consecutive year that the Police on the island reports that there was no major incidents of crime during the festivities.
“We had a safe and secure Culturama. When you think of Nevis and you think of the size of Nevis, you think of what we offer to our friends, our community our visitors, safety and security is right here it’s everybody’s concern and we can still say that Nevis has a safe event,” she said.
Tyrell, who has served as Chairperson of the summer cultural festival for the past three years, described the event as a wonderful activity but believes there is the need for year-long activities that would complement and enhance Culturama.
“Culturama isn’t a stand-alone-event. It is very much a community event and what …should probably happen more… are different activities going on in the year in support of Culturama from all avenues – the schools, the high schools, the primary schools, so that we build on what Culturama is meant to showcase…
“The very reason that Culturama was started 42 years ago, we need to look at that and figure out how, as a community, we can make that strong again. Culturama to me, from what I understand of the birth of Culturama, it was to grow talent so that we don’t lose our history. We don’t lose our culture. I think we need to find ways within our community to address that,” she said.
The Culturama 2016 Chairperson also spoke to the importance of more emancipation-related themes on display during the festival. She says it would offer and opportunity to help distinguish Nevis’ key festival from other summer festivities.
She said there is no benefit from Nevis having an event like any other and believes that there is great need to find ways to keep and make Culturama a niche festival.
Meantime, Tyrell used the opportunity to commend the persons who volunteered to be a part of the Culturama Committee serving with her leadership over the past three years. She said their contribution and sacrifice were phenomenal.
According to Tyrell, some of the volunteers opted to end their stint on the committee. However, she said the Culturama Secretariat is open to hearing from persons who are interested in volunteering to serve.
“Submit a written letter to the secretariat, letting them know the area that you are interested in coming onto the committee with. Let them know why you want to be on the committee. What you think you can bring to the festival.
“At the end of the day it is about the dynamics of also being able to pull together as a team for something bigger than ourselves because Culturama is bigger than all of its individual components,” she said.