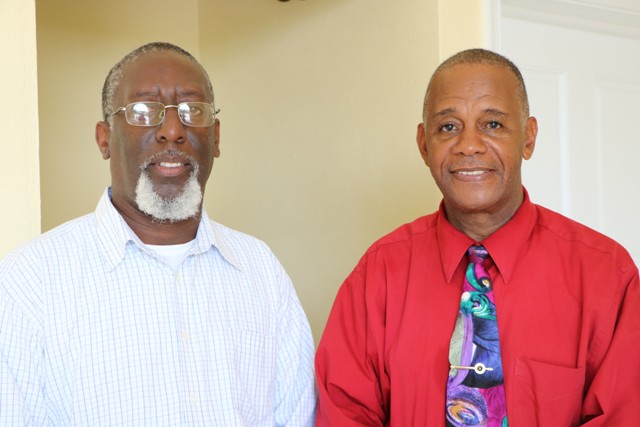 NIA CHARLESTOWN NEVIS (September 11, 2019) — Hon. Eric Evelyn, Minister of Culture and Community Development, says he is delighted with the work done on the Gingerland Cultural Centre, a new facility for the area.

The minister made the comment while visiting the project in Gingerland accompanied by Mr. Antonio “Abonaty” Liburd, the Project Manager, on September 10, 2019. He gave the assurance that the facility will be ready to stage this year’s Gingerama festival.

“I must say I am exceptionally pleased with what I am seeing. I have been visiting the project quite often during the construction phase for this particular building, and I must say that I have been very pleased … The quality of the work looks excellent…and we are now in just the finishing touches in having the building ready…

Mr. Evelyn who is also the constituency representative for the Gingerland area explained that the decision to construct the facility as a permanent home for Gingerama was to eliminate a number of challenges associated with staging the annual festival.

“We would normally have to call in Public Works and other crews to do fencing, to get the stage organized, to get booths organized and it normally takes a lot of time. The logistics is normally another problem and so we decided we needed a permanent structure, and so I would have taken the project to Cabinet and I want to thank Cabinet for its approval,” he said.

The minister made it clear that although the facility was built primarily for staging Gingerama, it is for all the people of Nevis.

“We are fulfilling our promise. We did promise the people of Gingerland that we would have this facility here… This will be a multi-purpose facility not only for Gingerama but for activities that persons in Gingerland or any of the other parishes would like to host here and so this will be a facility that we can use for cultural activities, for educational activities, for religious activities and so we are happy that we will have a central point in the heart of Gingerland where people can come and utilize the facility,” he said.

Mr. Evelyn also used the opportunity to commend the project manager for doing what he described as an outstanding job.

Meantime, Mr. Liburd noted that the main building which includes the staging area is almost complete. The main building is outfitted with two dressing rooms and washroom facilities, an Information Technology room which will serve as the hub for the Closed Circuit Television programme when it is implemented, a room from which the onstage lighting will be controlled, and the staging and performance areas. The facility will also be air conditioned.

Construction for a roof over the performance area is expected to commence shortly and Mr. Liburd explained why it is being done separately.

“We wanted to make sure, because of where we are and the wind coming off of the sea, we wanted to have a sound structure and so we have sat down with the architect over time and we have come up now with a structure that would be sound, that would be durable and that which could withstand hurricane conditions and so we will be starting that construction very shortly,” he said.

At present, eight vendor booths are being constructed and a perimeter wall around the facility and a new parking facility for patrons will be constructed.

Mr. Liburd noted that they have brought in additional work teams to meet the target deadline in November.