Reigning Ms. Caribbean Culture Queen Ms. Leslassa Armour-Shillingford presents a token of appreciation on behalf of the Pageant’s organizers to Deputy Premier of Nevis and Minister of Culture Hon. Mark Brantley in Charlestown on November 29, 2013

NIA CHARLESTOWN NEVIS (November 29, 2013) — Deputy Premier of Nevis and Minister of Culture Hon. Mark Brantley, said he was honoured to receive an appreciation plaque presented to him by the reigning Miss Caribbean Culture Queen Ms. Leslassa Armour-Shillingford on behalf of the Nevis-based regional Pageant’s organizers.

Mr. Brantley was at the time speaking to the Department of Information on November 29, 2013, after he was presented earlier that day with the token of appreciation for the Administration’s invaluable support for the pageant.
“I am very pleased to receive this plaque for and on behalf of the Nevis Island Administration and especially the Ministry of Culture from the Miss Caribbean Culture Queen Pageant. 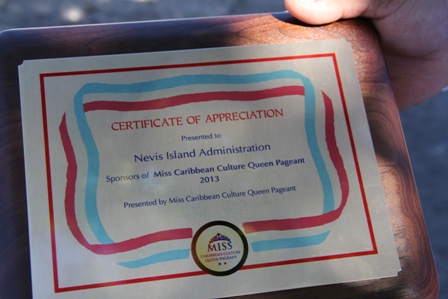 “Of course the winner, Miss Dominica presented this plaque earlier today and I would like to thank her and thank, of course, Mr. Randy Jeffers, who continues to do a phenomenal job,” he said.
The Culture Minister also assured of the Administration’s continued support for the pageant.
“[We] pledge our Administration’s continued support of that particular pageant and of similar events to promote our people, our females and our young people generally. So I want to thank them very much. I think it’s a remarkable achievement for Miss Dominica and I want to thank her and thank the organizers,” he said.