Deputy Premier of Nevis and Minister of Health Hon. Mark Brantley (left) marching with colleague Minister Hon. Troy Liburd and students in observance of World AIDS Day 2013
NIA CHARLESTOWN NEVIS (December 02, 2013) — Nevis joined the rest of the world in the observance of World AIDS Day with a march through Charlestown, two days before December 1st, the day set aside by the World Health Organization (WHO) to mark the observance.
The event was attended by primary and secondary school students and a delegation of Ministers in the Nevis Island Administration, led by Deputy Premier of Nevis and Minister responsible for Health Hon. Mark. Brantley. In brief remarks after the march, he underscored the Administration’s stance in its effort to continue to raise awareness of HIV/AIDS on the island.
“We continue to draw attention to HIV and AIDS. We continue to ask our people to take responsibility, to get tested, to know their status and to protect themselves. Have safe sex. Stick with one partner and abstain, if they can but the reality is that, we in the Ministry continue with the Health Promotion Unit and the HIV Unit to promote healthy lifestyles, healthy living. 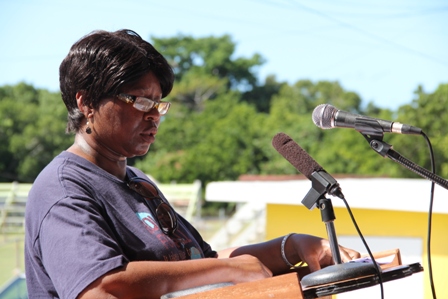 “I am so happy to see the scores of young school children from the various schools that have come out here to support our worthy endeavours…I am very happy that we, not just me but other Ministers of Government and members of Cabinet were able to participate this morning,” he said.
The theme for the day’s event was “Getting to zero: Zero new HIV infections; Zero discrimination; Zero AIDS-related deaths”, in keeping with the WHO’s decision to utilise the same theme from 2011to 2015. However, the 2013 campaign focused on the improvement of access to prevention, treatment and care service for adolescents, 10 to19 years, a group which the WHO said continued to be vulnerable despite worldwide efforts so far. 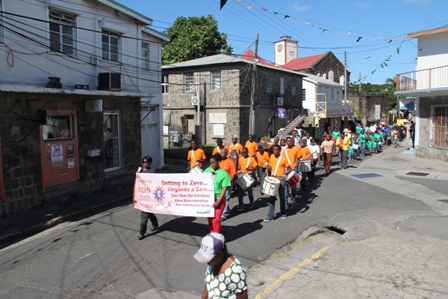 Meantime, Education and Prevention Officer at the Health Promotion Unit Nurse Eldina Farrell, in brief remarks at the end of the march, which concluded at the Elquemedo T. Willett Park told the youth present that HIV does not discriminate.
“Whether you are female or male, black or white, old or young, anyone can get it. Yet in spite of free screening, free Anti-Retroviral Therapy (ART), the medication used to treat persons infected with HIV, and free care and support being available in Nevis, most persons who may be at risk have never had the test done,” she said.
According to Nurse Farrell, since the first person was diagnosed with HIV in St. Kitts and Nevis in 1984 to 2012, 344 persons had tested positive for HIV but that number did not reflect those persons who had tested overseas. 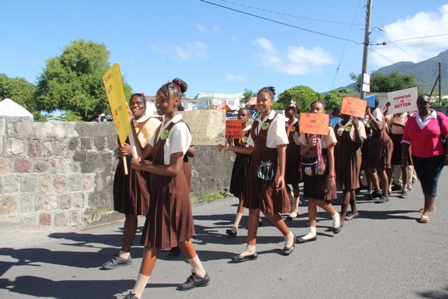 The Health Promotion Unit official further explained the age group of the persons who make up the number of persons who had tested positive for HIV.
“Of the 344 persons, seven are between 15 to19 years and 22 are between 20 to 24 years. Two of those persons were infected in 2012. In 2012, there were 10 AIDS-related deaths,” she said.
Nurse Farrell expressed the view that fear of stigma and discrimination, the leading drivers of the HIV epidemic had caused the reluctance of persons to know their status.
“Stigma is a belief or attitude or the labelling of an individual or a group or persons as different. The action resulting from stigma is discrimination or unfair treatment. Stigma hurts people. It makes them feel bad, lonely, ashamed and rejected. It also makes them lose self-esteem and hope and sadly, it makes them afraid of knowing their status,” she said. 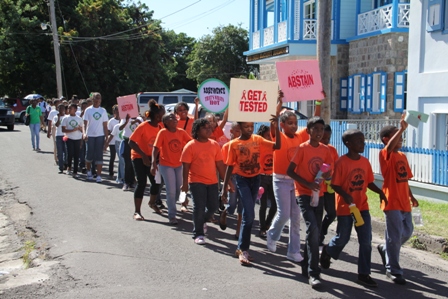 Ms. Farrell gave the example of People Living With HIV and AIDS (PLWHA) and Men who have Sex with Men (MSM) as being among the key populations which were often stigmatised by their own families and communities which oftentimes forced those persons to change their behaviour to be accepted, while they were driven to lead a hidden, underground existence which fuelled the epidemic.
Ending the issue of stigmatisation would take the efforts of all, the Health Promtion Unit official noted.
“The starting point is to change ourselves: the way we think, talk and act towards others including PLWAH, adolescents and other key populations. 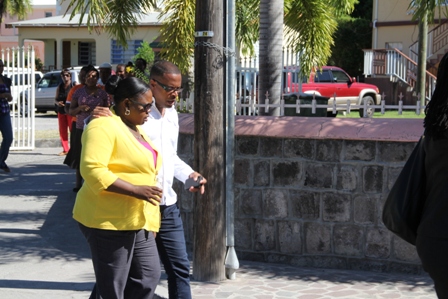 “When we would have done this, we need to educate others on the fact that HIV is not spread through casual contact such as hugging and the fact that stigma and discrimination hurts. We also need to challenge assertively, those in our community who stigmatise others,” she said.
In conclusion, Nurse Farrell used the opportunity to urge persons 18 and older and those 17 and younger accompanied by a parent, to take advantage of the unit’s National Testing Day on December 11, 2013 from 9 a.m. to 4 p.m. at the Administrative Building’s grounds in Charlestown.