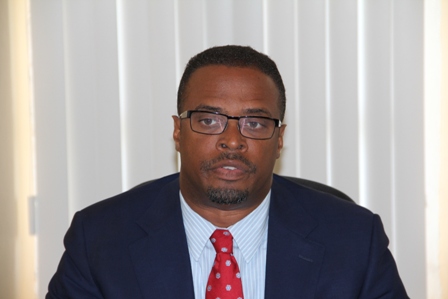 NIA CHARLESTOWN NEVIS (February 21, 2013) – Deputy Premier of Nevis and Minister of Culture in the Nevis Island Administration made his first call on the Nevisian public to participate in the upcoming Culturama 39 celebrations later this year, citing it was an opportunity to showcase and preserve the island’s rich heritage.

Mr. Brantley was at the time meeting with members of the Culturama Committee on February 19, 2013, at the NIAs conference room in Charlestown. The group of volunteers will organise and execute Nevis’ foremost cultural event held annually during late July and early August.

“Culturama is our primary display of Nevisian culture; it is a critical component of what we do and who we are as a people and I invite all of us from the school children to the adults to participate and get involved in Culturama 39.

“I think that this year we have an opportunity to showcase our Culturama in a way perhaps it has never been done before and as I said, all roads lead to the big 40th celebration next year,” he said.

According to the Minister, the celebration of Culturama 39 in 2013, would serve as a spring board for an even bigger event next year and thanked those who continued to volunteer their time and expertise to ensure success of the festival.

Notwithstanding, Mr. Brantley revealed the names of persons who would be involved in the festival’s organisation with the new Chairperson of the Central Committee Dr. Patricia Bartlett.

“Dr. Bartlett would be assisted by Mrs. Carvel Howell and Mr. Garett Skeete who have been appointed as the co-chairpersons for the Miss Culture Pageant. We have Mrs. Patricia Jeffers and Mr. Lloyd Lescott both have agreed to chair the Senior Kaiso Show. We have Mrs. Shirley Wilkes who is going to chair Mr. and Ms. Talented Youth.

“Mr. Livingston Liburd … he is a perennial member and he would chair the Junior Kaiso Show. Mrs. Karen Amory-Claxton comes back to us as the chair of the Cultural Food Fair. Mr. Ricky Hill…he comes back to chair the street activities. Ms. Tameka Lawrence is going to chair a new show that we are considering this year Ms. Teen Nevis,” he said.

Ms. Lorna Hunkins will serve as the Financial Controller, while Mr. Keith Glasgow will serve as Coordinator of the Judges. Former Assistant Commissioner of Police Mr. Joseph Liburd will be the Director of Security and Ms. Jean Caines will serve as Secretary to the Committee.

The Culture Minister further noted that there were still some vacant positions available within the Committee. However, he was pleased with the mix of individuals who had already agreed to give off their time and effort to make Culturama 39 the greatest event it could be.