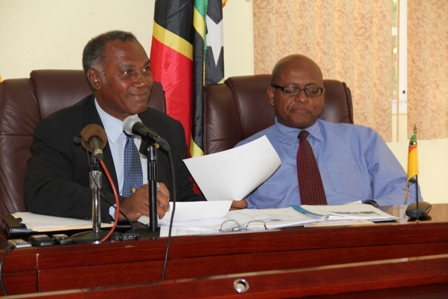 (L-R) Premier of Nevis Hon. Vance Amory and Permanent Secretary in the Ministry of Finance in the Nevis Island Administration Mr. Laurie Lawrence during the press briefing at the Government’s conference room in Charlestown
NIA CHARLESTOWN NEVIS (February 21, 2013) — Despite the fiscal challenges that his Government inherited, Leader of the Concerned Citizens Movement (CCM) led-Nevis Island Administration Hon. Vance Amory has expressed optimism about the island’s  economic future.

Mr. Amory was at the time meeting with local media on February 19, 2013, at his first official press briefing in the interest of transparency since his Administration’s January return to office.

“With the prospects for hotel expansion or the development of alternative energy resources, we have the opportunity to propel Nevis as a premier tourism destination underpinned with affordable clean energy…

“Investors have already come to us to talk about at least two hotel developments, one of which was being discussed with the former administration, one of which we had discussed many years ago before we left government and which has been in abeyance for all these six and a half years and the investors who are involved are now willing to come forward to reactivate the process,” he said.

With regard to the new energy source Mr. Amory explained that his Administration had also been approached by at least three investor groups who seemed willing to become involved in the development of alternative energy.

Notwithstanding, he gave the assurance that the NIA under his leadership would not rush into any decision.

“I do promise that we will look at this very, very carefully and systematically. We shall not be rushed into making any decisions until we are satisfied that we are getting the best because the resource, clearly, is resident in Nevis. If properly exploited [it] will have significant benefits for the people of Nevis and for the Nevis government long into the future if it is done well,” he said.

However, Mr. Amory used the opportunity to seek patience from members of the public as his Administration went about putting its fiscal house in order while it sought to attract investment.