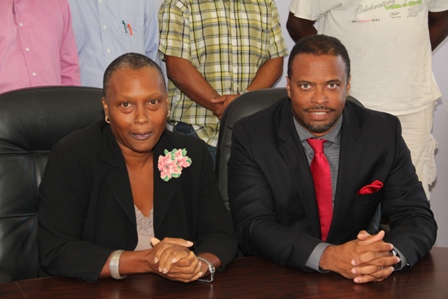 (L-R) Ms. Deborah Tyrell Chairman for Culturama 40 and Deputy Premier of Nevis and Minister of Culture Hon. Mark Brantley at the Nevis Island Administration’s conference room in Charlestown on January 15, 2014
NIA CHARLESTOWN NEVIS (January 15, 2014) — Deputy Premier and Minister of Culture Hon. Mark Brantley formally welcomed new Chairman, Ms. Deborah Tyrell, who will head the 40th anniversary of  Nevis’ Culturama Festival, the most prominent cultural event on the island’s annual calendar, when he addressed members of the Culturama Committee on January 14, 2014. The meeting was held at the Nevis Island Administration Building conference room in Charlestown.
According to Mr. Brantley, Ms. Tyrell who is no stranger to all things Nevis was selected to run the affairs of Culturama 40 because of her experience and interest in the Cultural showcase. It will run from July 24th to August 5th.
“We cast about trying to find someone who we thought could bring to the table the necessary experience and the necessary interest in Culture and all things cultural and we came up with Ms. Deborah Tyrell. Deborah is no stranger to Nevis she’s been here for a very long time. She is no stranger to pageantry and festivals…
“I believe all of us in Nevis know Ms. Tyrell, we have seen her, we have been exposed to her own art and she has been very deeply involved in art, in culture. She is originally from Trinidad and Tobago and therefore, we hope, brings some of that flavour to this position as well but certainly someone who is no stranger to us and to our culture and someone, who we feel, has the necessary maturity and leadership abilities to really move Culturama 40 forward. So I was very delighted when I asked her to serve and that she was willing to accept and to give something back,” he said.
The Culture Minister also reminded that the position was one of voluntary service just like the other members of the Culturama Committee and sub committees.
“I want to make it very clear that all the members who are here seated are doing this voluntarily and I think that is very important to note.  This is not something that people are paid to do and our Culturama is what we make it. It depends in large measure on people who come forward and volunteer their time and volunteer their energies and so to ask busy people or professionals in their own right, to give of their time to Nevis and to this festival is really asking them for quite a lot.
“I feel all of them should be congratulated for continuing to serve because this is what it is, a service and I want to specially congratulate Ms. Deborah Tyrell for accepting the challenge of chairing Culturama 40 and presenting to the people of Nevis and the people of the region and Nevisians abroad, a memorable cultural event and a memorable first ever homecoming celebration,” he said.
Mr. Brantley also urged the other Committee members to throw their support behind the new Chairperson and noted that their cooperation would depend on the final product delivered to the people of Nevis.
“I would just like to welcome Deborah to introduce her formally to the rest of the Committee as our new Chair and to ask that we continue to give her the fullest support and cooperation. I believe this committee has always worked really well together and that we continue to do that.
“Bear in mind that at the end of the day, that we deliver the best possible festival for the people of Nevis at home and those who are coming from overseas and of course our friends and brothers on St. Kitts who support in large numbers our Culturama activities. So we look forward very much to that. Deborah welcome, thank you for your willingness to serve and we look forward to working very closely with you for Culturama 40 and beyond,” he said.
Meantime, the Culture Minister registered his gratefulness to the outgoing Chairman Dr. Patricia Bartlette, who he said had done well during her tenure as Chairperson of Culturama 39, which had set the pace for Culturama 40.
“I want to go on record to thank Dr. Patricia Bartlette who chaired, very ably, the efforts for Culturama 39. I think we benefited tremendously from her insight and her ideas and her energy which was invaluable to making Culturama 39 a success. I think we all understood that Culturama 39 would have been a springboard for our efforts for Culturama 40 and that we would try to build on the successes there and certainly learn from the mistakes there as well.
“I would want to go on record by thanking her. Dr. Bartlette has moved on, she has some other things she needs to attend to which do not permit her to devote the time and attention to chairing our Culturama 40 activities,” he said.
In response, Ms. Tyrell thanked Mr. Brantley for the opportunity to give back to Nevis.
“Thank you Mr. Minister for the call and I just wanted to say to everyone, I am very grateful for the opportunity to serve, to collaborate with all of you as we plan and organise Culturama 40 and the homecoming celebration,” she said. 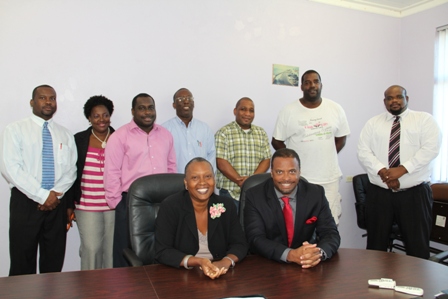 In her biography, Ms. Tyrell was described as a passionate advocate for Culturama and its events and one who had shown her support for all aspects of the festival. She chaperoned two Miss Culture finalists, advised calypsonians and also provided burlap for troupes costumes on the parade.
“An active participant in Nevis’s ongoing cultural scene, Deborah is the current curator of the Charlestown Art Gallery, exhibiting works of art from Nevis’s art community. She lovingly restored two chattel houses, one of which is immortalized on a $6 Nevis stamp.
“In 2007, Deborah started Island Living, a small business that employs women working in the visual arts. The company creates a diverse range of “Made in Nevis” fabric art pieces for the local and international market,’ the Biography stated.
Ms. Tyrell was born in San Fernando, Trinidad but was raised in Toronto, Canada. She has always been involved in the exposure of Caribbean art forms to a wider audience and was crowned the 1976 Miss Caribana Queen for the annual Toronto festival.
She later received the first Women in Pan Award for her contribution to steelband development in Toronto. Deborah holds a Visual Arts Diploma from Sheridan College, Ontario, Canada.