Mr. Blackett made that disclosure in an interview with the Department of Information on Monday, when he addressed the matter citing that the May outlook had called for a total of 12-18 storms but as of August, expected 14-19 7-10 of which were expected to be hurricanes up from the previous projection of 6-10. However, he did stress the need for continued preparedness.

“The implications are not a whole lot in the sense that it has only gone up by one or two the number of storms or hurricanes. By saying the implications does not change by much, it means whatever you were suppose to have done for the previous estimates you should be doing for the current estimates.

“Therefore you need to take precautions at this point in time in terms of looking around you and finding what needs to be done. I would expect that you would look around in your yards and find out are there any things that can be blown around in the event of a storm or a hurricane. Are your shutters able to close? Is your door safe? Is your guttering cleaned? Is your roof well fastened and things of that nature, which are available on our website at www.nevisdm.com,” he said.

According to Mr. Blackett, the impact of the passage of Tropical Storm Emily on the Caribbean including Nevis just over a week ago, should serve as a warning to all.

Notwithstanding, Mr. Blackett lamented that  the people of the Caribbean were prone to forgetting the seriousness of the Hurricane Season once  a number of years had passed by and no hurricane had passed. He urged all to pay greater attention and to do all that is necessary in homes, workplaces and businesses to ensure all were in a state of readiness for the remainder of the 2011 Atlantic Hurricane Season. 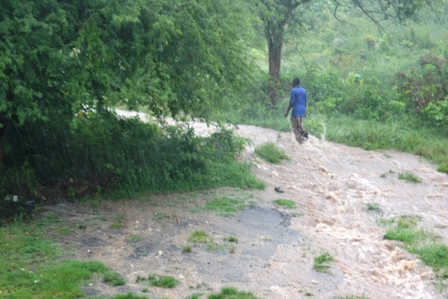 “If you are not ready yet plan now. Don’t wait because disasters don’t discriminate,” he advised.

With regard to Nevis which is prone to flooding, the Disaster Director used the opportunity to fine tune their plans noting that September was an important month during the Atlantic Hurricane Season.

“If you are in a susceptible area for flooding and we have and a couple of flash flood watches and warnings already you need to be prepared in the event that your area becomes flooded. There are a number of areas in Nevis where that happens not only where you live but also along the roadway and a few years ago we had an unfortunate accident at Nisbetts where persons were trying to cross a severely flooded road.

“So you need to be aware of where your hazards are with respect to flooding. If you are in a hazard area then you need to take all appropriate precautions to mitigate the hazard,” he said.

Mr. Blackett also urged persons to make reports to the Police if they know persons who were responsible for throwing away garbage and other debris in the ghauts or waterways blocking them.

“If you are one of those persons throwing away things in ghauts you need to cease and desist. If other persons are doing it you need to report them because it creates a problem for persons not only downstream but persons upstream as well,” he said.

“You need to listen to the media, look at your television, check your internet or whatever sources available to you, so that you can prepare yourself and react accordingly,” he said.