She was at the time responding to a question in an interview with the Department of Information on Monday. Ms. Lawrence said it was important for home owners and businesses to be in a state of readiness in relation to their waste disposal.

“We are asking persons to pay special attention to the news media for updates because during a storm, there are usually interruptions in the collection schedule. We are already facing some challenges as it relates to our collection schedules and that matter can only be compounded in the event of a storm or hurricane.

“So we need persons to be mindful and ensure that you have enough garbage bags, plastic bags so if you need to keep your garbage on your property for two or three days after a storm has past, you would need to be prepared to do that,” she said.

In addition the General Manager reminded the public that if anyone had trees to trim they should do so ahead of any impending weather systems and ensure that the trimmings were disposed of properly at the Long Point Landfill.

She also had some added advise and told homeowners they should also secure their waste disposal bins and ensure that they were securely tied down in case of high winds. Loose debris around their homes, she reminded, should be removed and secured. 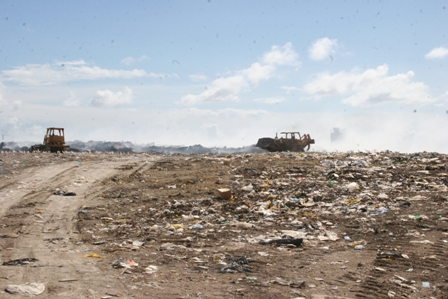 With regards to the actual garbage Mrs. Lawrence noted that waste should be separated.

“We also want to remind persons to separate waste as much as possible. Glass and broken glass you should keep that away from your regular house hold garbage for safe handling and to again stay tuned to the news media for updates in the collection schedules,” she said.

Meantime, the Solid Waste Management Authority General Manager expressed dissatisfaction with the illegal manner with which waste continued to be disposed of by some, as she stressed the importance of proper waste disposal.

She said the Authority faced a constant battle with persons and businesses even residents who cleared their property of trees and brush and green waste.  Sometimes, in good faith, they would hire a trucker who would not bring the debris to the land fill. Instead they would dispose of it on vacant lots, ghauts and water ways which often posed difficulties during the rainy season in particular.

“That can really affect us were it would clog drains and clog the natural run off of access rain water.

“So we are begging persons to cease from such practice. We are also asking the general public that when you see truckers disposing garbage and disposing waste in areas that you know are not designated for waste disposal, to contact the Solid Waste Management Authority at 469-1762 or the Environmental Health Department and make a report,” she said.