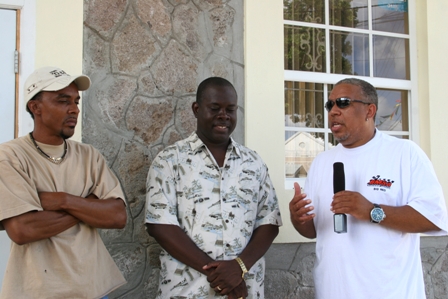 Minister in the Nevis Island Administration (NIA) and Area Representative for the St. Pauls constituency Hon. Robelto Hector, described the drag racing track under construction at New River, as one that would meet international standards and be ranked among the best in the Caribbean. The track is earmarked for completion by the end of August.

The Minister made the disclosure when he spoke with the Department of Information on August 18, 2008. He said the though the project was a campaign promise, it was also designed to remove racing from the streets of Nevis into a safer environment, to provide employment and to expand on the island’s tourism product.

“During the campaign of 2006 we sought of introduced drag racing as a sport to the general public. We felt here was an opportunity for us to introduce it as a sport at the same time it had great implications in terms of the tourism product
A section of the half mile drag racing track under construction at New River. When completed by the end of August the track will have a top of the line surface, international markings and will also meet with international safety standards
that can be expanding and so on coming into government we set about making this a reality. 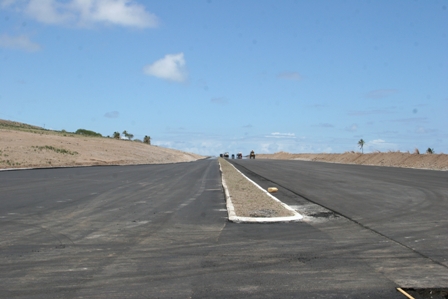 “Drag racing is an effort to take racing off the road and to give an avenue for youngsters to develop themselves and to practice racing as a sport. In getting the facility now at New River, it is an opportunity for this to be a reality,” he said.

Mr. Hector disclosed that the first major event will be kept on Independence Day September 19 and so far a number of neighbouring islands involved in the sport, had been invited to view the facility which was still under construction.

“We are having our first race on Independence Day. We are looking at the window of opportunity to exist between 12 till 5pm that afternoon. It would be our first and we are moving busily to put in place all the plans that are necessary to execute the drag racing as a sport so that Nevisians can observe for the first time what it is. 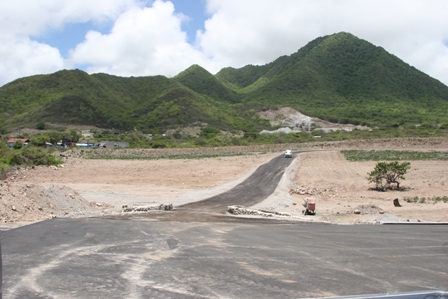 “We have contacted our neighbours Antigua, St. Croix and as recent as yesterday [Sunday August 17, 2008] we had a visitor from St. Maarten a member of the Association there, to guide us in terms of the implications and the necessary infrastructure and improvements that we would want,” he said.

Meantime, representative from the St. Maarten Sports Foundation Mr. Henry Ellis told the Department of Information during his visit, that he was pleasantly surprised to see the magnitude of the track.

“When I was invited to come over here I was hoping that we could have something like street racers the guys who have the street cars in St. Maarten but I can assure you all, we will come over here with some professional cars once you all have something officially opened up for the region…Nevis is good to go. I was quite
A section of the half mile long safety berm along the sea side of the track will be grassed to guard against soil erosion
impressed. The track is one of the best I have seen in the Caribbean,” he said. 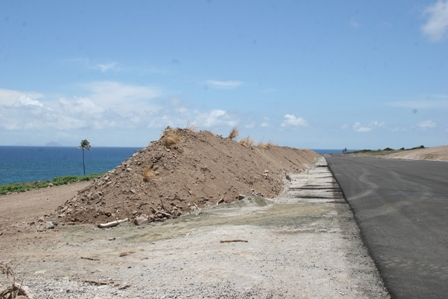 On Tuesday August 19, 2008, Mr. Hector welcomed President of the BVI Motor Sports Association Mr. Anthony deCastro who expressed his delight with the track and registered his association’s intention to participate in promote the September 19th event throughout the motor sports community in the Caribbean.

“I must say that it is an honour to come down here and see the kind of works that you guys are doing. It is a beautiful track, it is a beautiful island and I am going to do the best from BVI Motor Sports as President to push this event, push the track and push Nevis we are brothers in the Caribbean good for you good for me.

“I appreciate you taking your time out to invite us along to help and I would liaise with all other guys that I could get involved in all the other islands
Earlier construction works on the drag racing track
because we are going to do a big thing here,” he said. 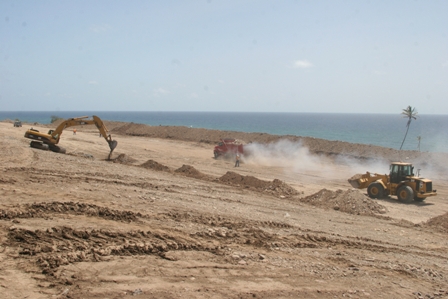 The BVI Motor Sports Association President said they would advertise Nevis as a drag racing destination, how to get to the island and places to stay for the races in September.

Mr. deCastro also praised the Nevis Island Administration (NIA) for its decision to invest in a drag racing track. He said there was a stable race track in St. Croix and a major one in Santo Domingo but St. Maarten had none. In Antigua he said the drag races took place on private lands which were always controversial.

“So it is good when you see the government step forward and do something. That means it would be accessible to the masses instead of some times you can and sometimes you can’t race and that’s the beautiful thing about doing this here in
A view of a section of the drag racing track at New Rive from the Island Main Road
Nevis because you know, that this is a government backed and sanctioned track, so you know that you will be able to race and do what you gotta do. 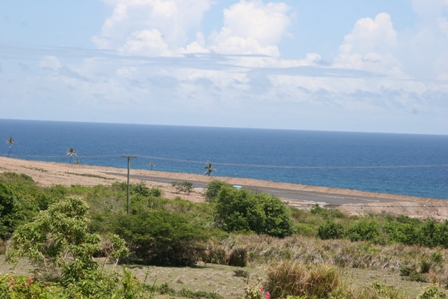 “A lot of other places, I think, they are going to follow the example that Nevis has set because it is all about we trying to get a circuit through the Caribbean. If we have a circuit in the Caribbean we can race up down, side ways, here today this month we in Nevis three months down the road we in Trinidad. So you always have races going on and keep the fuel going for the interest to be there. I hope that you [Nevis] are all ready for what’s coming because it’s going to be a tidal wave,” he said.

In response to a question, Mr. deCastro referred to drag racing as a relatively safe sport which had many precautions and restrictions. In his view, it was safer to race on the track than many other daily activities that members of the public were involved in.

“It is actually safer to race on the track than to drive on the street…There are a lot of rules and restrictions in place for safety features. So even though people look at it as a dangerous sport, actually it is a lot safer than a lot of things that we do day to day because of the restrictions and the rules that are in place and it’s a place for venting, you know, get out some of that frustration out of the regular work week anyway,” he said.

The track is being constructed in keeping with international safety specifications in relation to the sport of Drag Racing by Surrey Paving and Aggregate Ltd., a Jamaican based company. The firm had also been contracted by the NIA to construct a number of major roads on the island in the last two years.

The Nevis Drag Racing Association headed by President Mr. Vaughn Anslyn, had been involved in every step of the project, including the preparatory work for the premier race in September. To raise awareness of the sport the group took part in the Culturama Street Parade and will host a show at the Cultural Complex later this month.