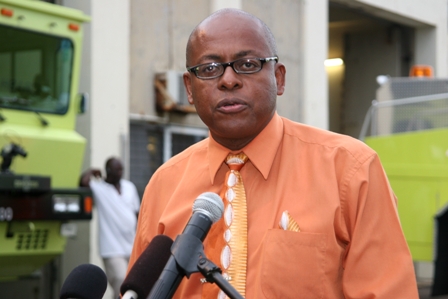 Chairman of the Nevis Air and Sea Ports Authority (NASPA) Board Mr. Laurie Lawrence, told a gathering of officials from the Nevis Island Administration (NIA), NASPA staff and members of the public, that the breakdown of the only fire tender at the airport on Nevis in January highlighted a major weakness at the airport and by extension the island.

He said at a recent ceremony to commission a new fire tender that the incident which had forced civil aviation officials to down grade the airport to a level three, was a source of major inconvenience to the traveling public and had highlighted a dearth of skills on Nevis in the diagnosis and maintenance of sophisticated mechanical equipment.

“I would like to encourage some of our young students who are academically inclined to consider pursuing advanced studies in the technical areas such as mechanics, engineering and electricity,” he said.
Mr. Lawrence also encouraged the NIA to place more emphasis on the provision of training in the technical areas which he pointed to. He said large sums were spent on training in the traditional areas of business, law, accounting and finance and not enough on the critical technical and vocational areas that were urgently needed on Nevis.
He also expressed the view that if there were highly trained engineers in Nevis, the problem which NASPA had faced at the Airport in Newcastle in January 2008, would have been resolved expeditiously.
Notwithstanding, Mr. Lawrence noted that NASPA had undertaken to provide training opportunities for its staff to ensure that they were well equipped to continue to improve the overall operations at the airport.
“We brought in Mr. Stefan Williams to Nevis to ensure that the operators [of the fire tender] receive high level training in the use and maintenance of the equipment,” he said and added that he was hopeful, that the relevant personnel had assimilated the knowledge and that they were well prepared to handle the challenges that lay ahead.
It was later announced by Airport Manager Mr. Stephen Hanley that two government mechanics would travel to Miami through NASPA for extended specialised training.
Premier of Nevis Hon. Joseph Parry, who was present at the ceremony, said that his government had made training a priority since it had taken office two years ago. Once the Administration realised there was an urgent need for technical and vocational training, it took the necessary action, among them the provision of scholarships, to facilitate training in those areas.