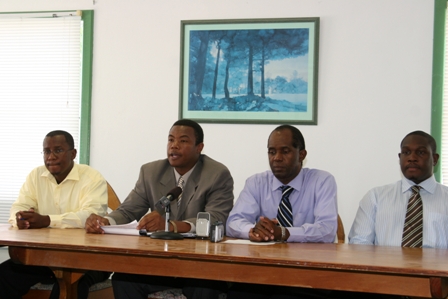 Junior Minister of Trade and Industry, Import and Export and Consumer Affairs in the Nevis Island Administration (NIA) Hon. Dwight Cozier, appealed to members of the public to treat the Supply Office in the Department of Trade on Nevis as a charitable institution and one which worked in the interest of the people of Nevis.

The Minister flanked by his Permanent Secretary Mr. Dwight Morton, Director of Trade Mr. Jermaine D. Stapleton and Business Development Officer Mr. Patrice Wilkin, made the comment during a press conference on August 20, 2008, at the Ministry’s conference room on Government Road. The conference was called to inform consumers of the status of a number of basic food items on the island.

“We want to, therefore, appeal to the general public to understand the implications of this and to therefore treat the Department of Trade as an institution that is charitable and therefore working in the interest of the people of Nevis,” he said.

During the Press conference which followed on the heels of earlier meetings with the Nevis Chapter of the Chamber of Industry and Commerce and a group of Bakers on the island, the Minister pointed to the availability of flour, sugar, rice and milk and also on horse feed.

He explained that there had been some shortages but the Ministry of Trade through the Department of Trade, had worked feverishly to ensure that the supply of these products remained consistent.

“We have managed to work quite feverishly and secured from our counterparts in St. Kitts some 400 bags of flour in the short term and we are expecting sometime later this week, by Thursday or Friday, some 520 additional bags of flour to come into our Nevisian market.

“So we want to say to the bakers and to the general public that we are not out of flour, we have flour and so you can be assured that you will have your bread,” he said.

The Minister also added that the oil spill had also adversely affected the supply of rice to the supplier in St. Vincent.

Mr. Cozier blamed a recent oil spill in the Mississippi River in the United States which affected a number of cargo vessels that transported supplies of grain and wheat to the Eastern Caribbean Group of Companies (ECGC) in St. Vincent and the Grenadines, the island’s main supplier.

In relation to the supply of sugar, the Minister explained that the Guyana Government had issued a press release which announced that it would not be able to supply sugar to the Caribbean due to a shortfall in its arrangements with the European Market.

“However, we have managed to secure two shipments of sugar out of Guyana which should be reaching Nevis between Friday of this week and Monday of Next week. So we will have sugar by next week and that is a positive.

“We are however continuing to work to secure a more formal relationship with the Guyanese sugar producers and we are also looking further afield into countries like Guatemala and other countries, which if Guyana fails as a source, we would be able to turn to,” he said.

With regard to the supply of Carnation milk, Mr. Cozier noted that the shortages that had been experienced, was one inherited through a tender arrangement that was in place with the supplier Nestle Peru.

“Our milk is supplied from Peru and it supplied under tender arrangement which gives us a preferential price of US$29-30 a case of large Carnation milk. If we go outside of that tender arrangement, as we have done in the past, we can go to the Free Trade Area of the Americas and purchase milk from Trinidad. However, the price for milk from Trinidad would be somewhere in the region of US$36-36. That is to say a 25-30 percent increase in the price.

“We have, in desperation, had to do that a few months ago and as a result there was an increase in the price of milk from $70.50 to $80. However, because the price of the cases that we are purchasing is in the region to US$36-36, the milk has been heavily subsidised to the tune of about $14. We are therefore trying to seek a more formal relationship with Peru because of the fact that we have recognised that part of the reason for the shortages created in Nevis of milk, is the length of time that a shipment of milk takes from Peru,” he said.

The Minister also used the opportunity to alleviate the fears of horse owners on the island and cited that the Department of Trade had been able to alleviate a slight shortage after it had taken a decision to conduct business directly with the distributor in Canada for less.

“We also were faced with a situation regarding the horse feed. We had a slight shortage that we have been able to alleviate by going directly to the supplier in Canada, a company by the name of Grainex who has assured us that they will be able to supply us with this product at a reduced price from what we get from our usual supplier the ECGC.

“So on horse feed, we are proceeding quite well. We just want to say that to alleviate the fears of those members of our community who have horses because they have indicated their concerns over supply that the supply will be back on stream very shortly,” he said.