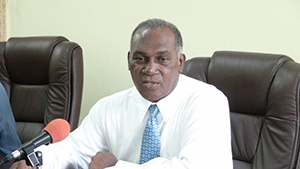 Premier of Nevis and Minister of Education Hon. Vance Amory
NIA CHARLESTOWN NEVIS (July 29, 2014) –Premier of Nevis and Minister of Education Hon. Vance Amory told head teachers of Government-owned schools and education officers on the island that they should give attention to the social development of their students, even as they focused on their scholastic development.
Mr. Amory’s comment came when he addressed the education officials at a meeting at the Ministry of Finance conference room in Charlestown, on July 24, 2014.
“I ask you, myself, to have a focus on the children not just in terms of teaching them the subjects and the academics but to focus on their human side, on the social development, on trying to make them into ‘citizens of St. Kitts and Nevis’ and in this case, especially of Nevis, who would shun away from anti-social behaviour which is plaguing us.
“I implore you, as I implore myself continually, not to ignore the fact that there are some very serious gaps in the developmental process, the socialisation of our children which are creating some of the problems which we are experiencing in our communities and in our country,” he said.
According to the Education Minister, the meeting was an important one.
“It really is for me a necessary meeting because what I would like to do or have accomplished as a result of this meeting, even though we have had graduation ceremonies, we have had school reports, yet, I am aware that there are things which we want to discuss, things which we want to share in a more concentrated or controlled environment, so that we can have an appreciation, in full, as to what we, as the Ministry of Education, the Nevis Island Administration and the Education Department and the several units for which you are responsible and which you have managed, how we have been able to deliver the education and the programme for which we have been charged,” he explained.
However, Mr. Amory told the head teachers and education officers that they, like him, should have no tolerance for anti-social behaviour.
“I personally, have a very strong zero tolerance to anti-social behaviour and I would clearly not want any of you to tolerate it. I know we have had cases and reports and so on and I have asked that those reports be sent because where we have to take strong measures, we will take strong measures.
“So this meeting will give me and give all of us…an idea of where we are or whether we have accomplished the things that we wanted to accomplish and the level to which we have accomplished those things in a qualitative way,” he said.
The Education Minister further explained that it had become necessary for the island’s education officials to go beyond their quantitative accomplishments in the schools.
“The quantitative measurement will clearly be the examination results, how many subjects were passed, how many students went into 1A1, how many to 1A2 and so on. Those are the quantitative assessments but I want us to get a little bit beyond the quantitative and look at the qualitative. Are our children, in your estimation, significantly improved in their behaviour and can we expect to see positive changes, positive outcomes [and] positive attitudes developing?” he enquired. 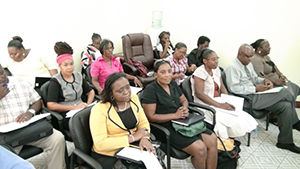 “Are our children being taught effectively at their homes?  We do say, that the children spend time at home and their parents are their first teachers and all of those good things. I want us to examine that in the light of what transpires when the children come to school. That is a little exercise which I want you to do as the managers of the system,” he urged.
Meantime, regarding modern technology and its impact on the students, Mr. Amory told the participants that, too, was an area that should be considered.
“I would like you also to consider whether in the economic and social climate, with the obvious proliferation of the social media and the other media, whether or not we are teaching our children to have the capacity to cope and to use and to not be swallowed up, negatively impacted or how they themselves could positively impact and positively use things like that, through their own, through our teaching of them and our ability as education officials to get them to be rational in their thinking, to be discriminating in what they hear, in what they read, in what they see, how they respond to those things and I think these are the things which I feel can make a big difference,” he said.