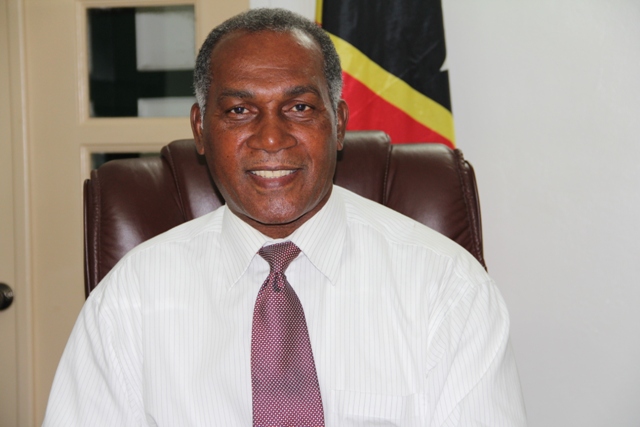 Premier of Nevis and Minister of Education Hon. Vance Amory
NIA CHARLESTOWN NEVIS (March 10, 2014) — Young persons on Nevis have been given an opportunity to pursue university studies in the Republic of China (Taiwan) and Premier of Nevis and Minister of Education Hon. Vance Amory, has urged them to take advantage of the offer. The closing date for receipt of applications is March 31, 2014.
In a statement on March 07, 2014, Mr. Amory noted that the offer of the fully-funded scholarships had recently become available through the Embassy of the Republic of China (Taiwan) based in St. Kitts.
“As Minister of Education I wanted to just make our young people aware that there are opportunities for them to take up offers of scholarships for university training in the Republic of China (Taiwan) and this opportunity is available to anyone who has the qualifications for the university.
We have received from the Embassy of the Republic of China (Taiwan) the announcements of these scholarships and I want to encourage every single person who would like to avail him or herself of this opportunity, to make an application to see if they can have a scholarship to study at university.This is not in any specific area. It is really a general invitation,” he said.
According to the Education Minister, Resident Ambassador of the Republic of China (Taiwan) to St. Kitts and Nevis His Excellency Miguel Tsao,  had indicated to him that he would like to see the young people of Nevis avail themselves to the study opportunity.
Mr. Amory also gave information which outlined the extent of the scholarship.
“The scholarship would be fully paid in terms of tuition. There will be a stipend payable every month if you are successful in getting a place at the university that you choose for your study.
“This would also involve your having an opportunity to learn the Chinese language, Mandarin, which would add a new cultural dimension to each one of you who takes up this opportunity. Also, when you return to Nevis you would have that added benefit of bringing with you that new aspect of your cultural development,” he explained.
However, he added that he would set up a committee responsible for vetting applications to ensure that they were properly done.
“I am setting up a special committee which will deal with these applications and will vet them to ensure that they are thoroughly and properly done. I am asking through this medium, that our young people who wish to take up this opportunity, that you make an application to the Permanent Secretary Human Resources [Ornette Herbert] or get in touch with the Permanent Secretary of the Premier’s Ministry [Wakely Daniel] or with the Permanent Secretary of the Ministry of Education [Lornette Queeley-Connor] and anyone of those three persons would be able to guide you through the process,” he said.
Mr. Amory further stated that there had been a number of Nevisian students who, in the past, had taken advantage of the scholarship opportunities in the Republic of China (Taiwan).
He urged the would-be applicants to not be deterred by the distance but to consider their ability to contribute to the development of their homeland on completion of their studies.
“A number of our students in the past have taken up these scholarships and they are now poised to make a contribution to their country and I want, therefore, to say to you, do not let yourself be overawed about the distance of Taiwan from here.
“Based on the experience of others and based on the information I have from the Ambassador, if you are granted the scholarship and accepted at university, you will be properly looked after and you really can feel, as it were, as safe away from home and you don’t have to be worrying…
“I want to say to you, that it would be good if 10, 12, 20 of our young people took up this opportunity because it will not cost your parents any money. It would not cost the government any money and you yourself would acquire an education which you can be proud of and which you can utilise when you come back to your country,” he said.
Also named on the committee are Consultant to the Premier on Education Mrs. Jennifer Hodge and Cabinet Secretary Mr. Stedmond Tross. Mr. Amory added that apart from vetting applications for the Republic of China (Taiwan) scholarship applications, the Committee would also be responsible for vetting and making recommendations with other applications for study with the Nevis Island Administration’s assistance.
“That Committee takes the matter of what people term the purely political decision making. It would vet, speak with, interview the applicants for government assistance and then they will make their recommendation.
“I think it’s important that we are engaged in this level of transparency so that the accusations which have been made in the past about political decisions, in terms of who gets scholarships, no longer applies,” he said.