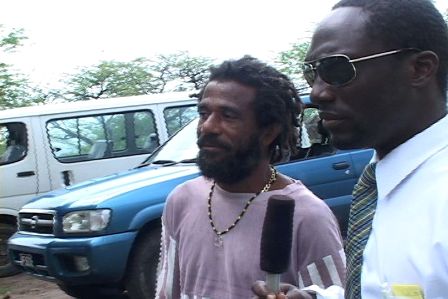 Livestock Farmer Mr. Gary Harris said he was pleased with the investment made by the Nevis Housing and Land Development Corporation (NHLDC) in partnership with the Department of Agriculture on Nevis, to relocate his farm from Prospect Palms to Maddens.
He made the comment during a dismantling exercise at his farm at Prospect Palms. Mr. Harris, who resides over seas, also registered his intention to continue to invest in his farm.

“I like the area and I am happy with the investment…yes I plan to invest more money into my operations to make it bigger than it is right now,” he told the Department of Information on September 03, 2008.

The relocation was one of several that were done in areas earmarked by NHLDC for housing developments but had been used by livestock farmers.

General Manager of the NHLDC Mr. Eustace Nisbett Jr. explained that they had made a commitment to provide adequate alternative farm lands and to assist with the relocation efforts.

Director of Agriculture on Nevis Dr. Kelvin Daly (r) and livestock Farmer Mr. Gary Harris
“We would have already made allocation of some 15 acres of land in the Maddens area and with the assistance of the Agriculture Department we would fence that and build a number of pens to house the animals that are here,” he said.

Notwithstanding, Mr. Nisbett noted that the Corporation’s assistance to the Farmers had been significant over the past two years and spoke of the good relations they had enjoyed with Director of Agriculture Dr. Kelvin Daly.

“Our involvement and assistance in agriculture has been significant…Dr. Kelvin Daly who is the Director of Agriculture has been working very well with us over the past two years in ensuring that the farmers in the respective areas around Nevis are well taken care off in any relocation process that we have.

“He would be able to testify that together we would have helped some 20 plus farmers over the last year and a half and we continue to make a commitment to agricultural development on Nevis,” the Corporation’s General Manager said.

Dr. Daly who was present at the relocation exercise thanked Mr. Nisbett Jr., Minister Housing, Lands and Agriculture Hon. Robelto Hector and all others who were involved, for having assisted the Department of Agriculture with the relocation of farmers to their new surroundings at Maddens Estate, Low Ground Estate and Braziers.

“Mr. Gary Harris he is a livestock farmer both large and small ruminants. His animals will be moved to 15 acres of Maddens Estate. We can’t afford at Agriculture to lose a significant farmer like that, so we have bent over backwards to ensure that he has a viable alternative for his operations.

“This is only one of many exercises we have done so far. We have relocated pig farmers at Low Ground, we have relocated a livestock farmer to Braziers Estate and so in the face of development, we must remain cognisant of the fact that we still need animal production in Nevis,” he said.

Dr. Daly said too that the partnership between the NHLDC and his Department had so far yielded many benefits for the farmers in Nevis. 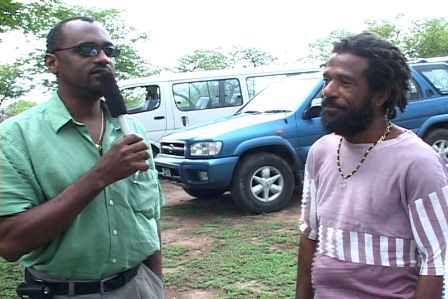 “They [NHLDC] are not just putting down houses willi nilli and living the farmers to fend for themselves. They are really investing a lot of money, a lot of time and effort, into ensuring those farmers are properly relocated on this suitable land.

“So I must say thanks to Mr. Nisbett he has been quite a good partner for the Agriculture Department, Minister Hector and all those persons involved,” he said.