“We received a refurbished laptop from the Nature Conservancy. Presently the Government of St. Kitts and Nevis and the Nature Conservancy are working on implementing a Marine Zoning project in which we will have different uses for different areas around the island in terms of the Marine environment like marine protected areas, marine parks and areas where people could fish only, areas reserved for transportation for instance.

“During this project we have a survey of the fishermen that is going on so a Fishers Survey is going to take place  and we are short of a computer here at the office and the Nature Conservancy took note of that  and decided that they were going to donate this refurbished laptop to the Department of Fisheries. It will help us a lot in implementing this project,” he said.

The second gift of a multimedia projector and an underwater camera which can also be used on land came from the Japan International Cooperation Agency (JICA).

The third gift was given to the Department in conjunction with the Nevis Turtle Group. 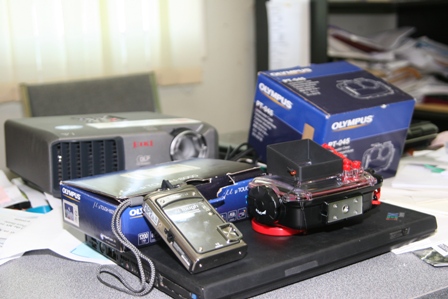 The multimedia projector, underwater camera and case and a refurbished computer

“In 2008 we received 5,000pounds sterling for sea turtle conservation on Nevis and we did a number of things. We produced a sea turtle calendar; we had quizzes, sea turtle camp for two years, sea turtle poster competition, we bus children and adults to the beaches to help in the sea turtle monitoring and tagging programme.

“So we will be better able to continue the sea turtle monitoring and conservation project in 2010/2011 with this small grant from Ruddord Small Grants Foundation. We say thank you to the Foundation for continuing to support sea turtle conservation on Nevis,” he said.