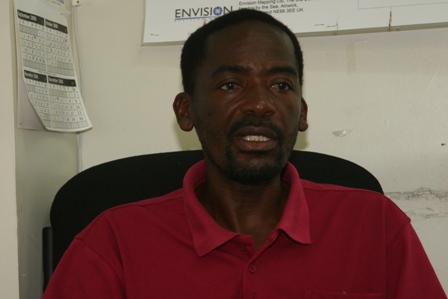 CHARLESTOWN NEVIS (May 04, 2010) — A top Fisheries Official on Nevis continued to urge Nevisians to join in the conservation of endangered spices and the turtles of Nevis.

Director of Fisheries on Nevis Mr. Lemuel Pemberton issued the call in an interview with the Department of Information on Friday, as he spoke of the positive impact the ongoing monitoring programme in partnership with the Nevis Turtle Group has had on students on the island.

“The programme has impacted them positively we are looking at conservation and since they have come on the monitoring trips they have refused to eat sea turtles. So we are giving the sea turtles a bit of a chance.

“We know that there are people who continue to consume them but we are hoping that the next generation of Nevisians that there will be fewer of them consuming turtles and they will be given a chance for their population to increase and multiply then we can decide whether we are going to use them sustainably,” he said.

Mr. Pemberton made particular reference to the students of the Joycelyn Liburd Primary School in Gingerland, who he said had been enquiring when the Friday night monitoring trips would resume.

“We are having school children that are asking us practically every Friday night to go out on the beach. So we will start in May to go out every Friday night until October, unless the weather is bad and we will look at turtles. That special Friday night is like family night the kids can come along with their parents. The other nights of the week members of the Nevis Turtle Group and the Department of Fisheries will go out and monitor the turtles… 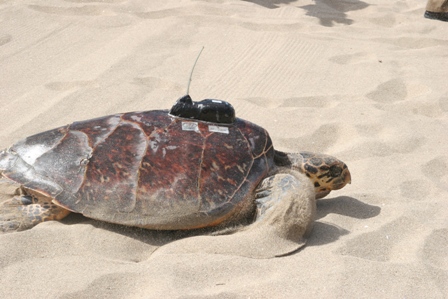 “It has been going well. The children were very much involved in the Sea Turtle Poster contest. We also had a quiz contest at the Joycelyn Primary School.  In particular children from that school have insisted on coming along on these sea turtle monitoring trips on Friday nights. They have been there. It has done a lot for them and they go home and tell their parents about it and they are very knowledgeable. We have had them on radio a number of times and they know about turtles on Nevis,” he said.

The Department of Fisheries in collaboration with the Sea Turtle Group had teamed up with local cooperate partners Four Seasons Resort some years ago to tag and monitor the movement of Nevis’ turtles with satellite tracking devices. They continue to be monitored at www.cccturtle.org.

At present there are two turtles that continue to transmit signals which have provided revealing information about their migratory patterns.

“What we have learnt from this project is that the sea turtles of Nevis, yes they nest here and this is where they are born but they do not necessarily forage here. So it seems as if we get sea turtles from other islands that forage in our waters and our sea turtles forage in the waters of other countries,” he said.

With regard to the impact the recent oil spill in the Gulf of Mexico on turtles that visited Nevis Mr. Pemberton said the possibility existed for them to be affected.

“We have a couple of turtles that ended up off the cost of Nicaragua and that is not too far away from the Gulf of Mexico. So it is possible our sea turtles might be affected. We are hoping that that does not happen though, or we may not see the return of Mango, Ginger or Calypso [Nevis turtles] or whichever turtles we have foraging in that area.  We have three spices of turtles that nest on Nevis – the Green Turtle, Leatherback and the one that comes most frequently the Hawksbill turtle,” he said.