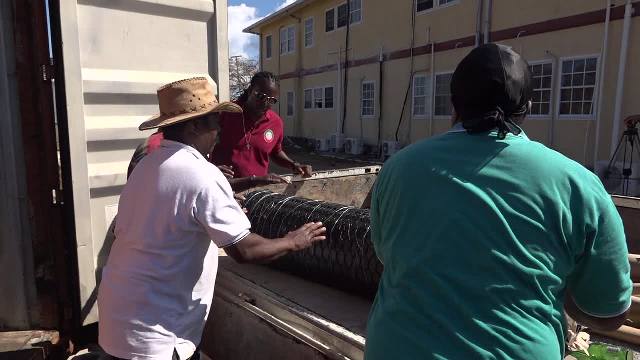 Fisher Mr. James Merchant of Hanley’s Road loads his gift of a roll of fish pot wire from the Federal Government on May 11, 2018

NIA CHARLESTOWN NEVIS (May 11, 2018) — Thirty Fishers on Nevis will benefit from a gift of 30 rolls of fish pot wire from the Federal Government as part of relief efforts following the passage of Hurricanes Irma and Maria.

At a handing over ceremony at Prospect on May 11, 2018, Mr. Lemuel Pemberton, Director of the Department of Fisheries spoke of the distribution process. He also expressed hope that more assistance would come from other donors.

“We have received some fish pot wire, hurricane relief courtesy of the Federal government and this is to sort of help out fishermen in terms of the damage suffered from hurricanes Irma and Maria last year. We know they lost a lot of their fish traps.

“We do not have a lot of fish pot wire. We only have 30 rolls as a matter of fact and we hope to get some more… The first set of fishermen that came here today, we are going to give them the wires. One roll of wire each, we cannot afford any more at his moment. Hopefully if we… have a generous donor who can give us more then we can give out more,” he said.

In response, fisher Mr. James Merchant of Hanley’s Road thanked the Federal Government and the NIA for the donation.

Mr. Huey Sargeant, Permanent Secretary in the Ministry of Agriculture and Fisheries, who spoke on behalf of Minister Hon. Alexis Jeffers, who is responsible for Fisheries in the NIA, said the donation has been a long time coming.

“We know that fisheries is one of the sectors that is most often devastated when it comes to hurricanes…We have been pleading and begging and seeking assistance, especially from the Federal Government who committed some funds.

“The funds took a little bit longer than we expected and we are happy here today to be able to present these rolls of fish pot wire to the fishermen of Nevis,” he said.

Mr. Sargeant also pointed to a similar donation which was made by Hon. Mark Brantley to his constituents in Bath Village in February.