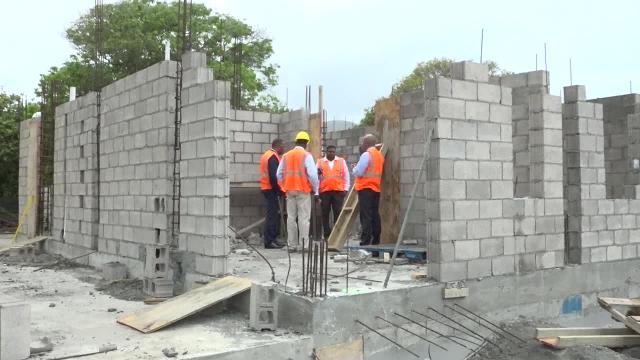 NIA CHARLESTOWN NEVIS (May 11, 2018) — Hon. Alexis Jeffers, Deputy Premier of Nevis and Area Representative for St. James’ Parish, recently led a team of colleague ministers in the Nevis Island Administration (NIA) Cabinet on a visit to the construction site of the $3.7million Newcastle Police Station.

Mr. Jeffers said the project is one which the Administration always felt was necessary and important to the state of security in the St. James’ area.

“It is a huge project and we’re proud of our accomplishment to bring this project to fruition in short order because, of course, we understand the importance of having this particular facility in the community…

“We are a thriving community over here in the St. James’ area. We have a medical university. You have hotels, and also you have quite a number of non-national visitors who come through this area. It is normally a hub of activity so this is why it is important to have it to ensure that there is convenience, safety, security, and all other good things that come along with this particular institution,” he said.

The Minister also expressed satisfaction with the status of the 15,312 square foot project which began in January 2018 and is at an advanced stage of construction. Completion is scheduled for mid-2019.

In the past, only the police station was housed at the location. However, on completion the two-storey building will be outfitted with new additions including a main entrance and lobby, offices and two holding cells on the ground floor. The first floor will house both Police and Fire Officers quarters.

The western side of the building, which will be fitted with a concrete top deck, will be used by the Fire and Rescue Services to access the building and to store emergency vehicles, such as the fire tender.

On completion, the police station will resume issuing temporary drivers’ licences to visitors.

The Project Manager is Mr. Stedroy Pemberton and Mr. Franklyn Jasper Stapleton is the contractor.

In 2016, the NIA took the decision to demolish the steel frame building which housed the Newcastle Police Station, over concerns for the wellbeing of the police officers stationed at the outpost and members of the public who used the facility.

As a temporary measure, the station has been relocated to offices opposite the Vance W. Amory International Airport in Newcastle.

Meantime, Premier of Nevis Hon. Mark Brantley said the NIA was committed to rebuilding a police station in Newcastle and expressed satisfaction with the status of the project which he described as an ambitious one.

“We are very pleased with what we are seeing thus far…The project is a very ambitious project. It is, in my view, an indication of this government’s seriousness and commitment to dealing with crime and criminality. It is also indicative of our commitment to the police who we know have suffered over here for some time in very, very dilapidated and terrible circumstances…

“This is a commitment to the community here and we certainly look forward in ensuring that going forward we have the very best facility for our police and we have the investment in our security system and for us that is critically important,” he said.

The other members of the delegation were Hon. Spencer Brand, Hon. Eric Evelyn and Hon. Troy Liburd.