Minister with responsibility for Public Utilities and Posts and Natural Resources Hon. Carlisle Powell told the Department of Information on Monday that the approval had come just days before.

“One will be in the New River area and one will be in the Hanleys Road Area. We will be proceeding with the drilling of those two new wells so that we can find additional water to stay ahead of the game, so that our people in Nevis will not have to revert to the days when they had to go long distances for water and had to go without water for several days on end. We are trying to stay ahead of the game,” he said.

According to Mr. Powell, BEAD had already done advanced exploratory work in the areas and Dr. Ronald “Skip” Hoag Senior Scientist and Geologist of BEAD had indicated the areas where drilling would take place had already been decided.

The Minister explained that the Drilling Company had other offers of work in various parts in the Caribbean and the NIA wanted to ensure that drilling projects were completed.

“BEAD has done a tremendous amount of work in the areas and Dr. Skip Hogg now believes he has a pretty good idea as to where to drill to find the water for these two new wells. A lot of the work has been done.

Bedrock Exploration and Development Technologies (BEAD) had been contracted by the NIA in 2007 to develop 1 million gallons of ground water daily, to complement the water supply that was available on the island. New wells were found at Maddens and Fothergills.

Later the initial contract between BEAD and the NIA was amended to extend the drilling operations for the provision of an added 500,000 gallons of water per day. 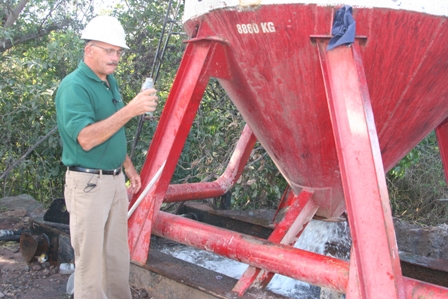 That operation led to a new well in Hamilton which Mr. Powell had described in February 2009, as having an adequate supply of water.

However, water from the Hamilton well had not yet been connected to the Nevis Water Department’s water network but according to Mr. Powell, plans were afoot to do so.

“There is a well at Hamilton which we are looking to hook into the system as quickly as possible. Once we get that Hamilton well into the system, we think that that will give us somewhere between 3-400,000 gallons of water per day.

“Once we hook that into the system that will be able to take care of the greater Charlestown/Hamilton area. It means then that we would not have to send as much water from Gingerland into Charlestown as we are doing at the present moment,” he said.

Mr. Powell noted that the Nevis public may not be aware that work had been done to lay water lines around the island and it had become easier to transport water. 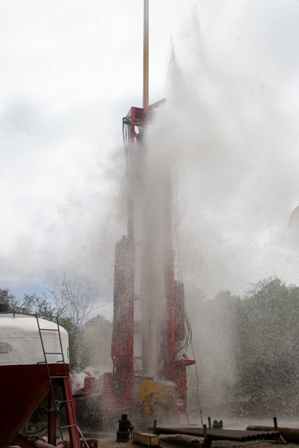