CHARLESTOWN NEVIS (March 10, 2010) — Minister of Culture on Nevis Hon. Hensley Daniel described construction of a state of the art Nevis Performing Arts and Conference Centre as the Nevis Island Administration’s (NIA) tangible support for the development of the island’s people and culture.

The Minister made that comment recently at a ceremony to break ground for the Taiwanese funded state of the art $3million ($2million loan and $1million grant) facility at Pinneys.

“We are persuaded that the Arts have a brighter future than sugar and bananas and they have as bright a future as tourism. We believe with the establishment of the Performing Arts Centre, we would add value to the tourism product and we will have a home for the Performing Arts. We look forward to all of our artists having somewhere to practise and also somewhere to perform,” he said.

According to Mr. Daniel, the project is another in a long list of projects commissioned by the sitting NIA that would have a lasting impact on the development of Nevis.

In the area of Culture the Nevis Development Cultural Foundation was established and also community festivals around the island, all of which were intended to give fillip to the development of culture.

“When we established the Cultural Development Foundation, we wanted to amalgamate all of the units of culture and also to save money in an environment where we have scarce resources.

“So we have since established the Foundation and brought Culturama under the Festivals Secretariat, established the Research and Documentation Unit and the Performing Arts Unit,” he said.

Mr. Daniel said the NIA held the view that projects had to fall in line with the thinking and the philosophy of the government and therefore when the sitting Administration came to government, the plans that existed for the centre then did not fall in line with what needed to be done and adjustments had to be made to facilitate a state of the art facility for Performing Arts. 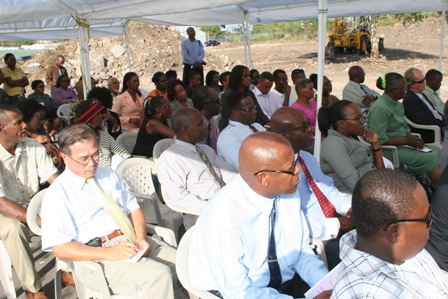 The Minister referred to the facility under construction as a fitting tribute to many of the island’s cultural icons, many of who had made a significant contribution to the development of culture at a time when hardly any buildings in which to perform.

“I want also to say to us that we will have with this centre, the opportunity to foster the development of the Arts and really pay some greater attention to the investment in culture,” he said.

Minister Daniel noted though the people of Nevis had a rich culture, it was at a rudimentary level in many respects but believed that with a state of the Performing Arts Centre, it was expected that it would also give rise to the development of the Arts.

He indicated that assistance would be sought for the development of the Arts on Nevis and had already met with representatives from the United Nations Educational, Scientific and Cultural Organization (UNESCO) for the region based in Jamaica.

“We said to them that we need to see a greater input from them in Nevis both in terms of resources and in terms of the preparation of persons for the Performing Arts.

“With the construction of this Performing Arts Centre, we are going to be preparing programmes and projects to engage UNESCO, so that we can have the kind of mix that we want in our cultural development,” he said.

Photo caption: A section of persons present at the ceremony to mark the start of construction of the Taiwanese Funded $3million state of the art Nevis Performing Arts and Conference Centre at Pinneys