CHARLESTOWN NEVIS (March 11, 2010) — A top official of the Government of Republic of China (Taiwan) in St. Kitts and Nevis has reiterated his Government’s continued support for the people of Nevis in areas of need.

Resident Taiwanese Ambassador to St. Kitts and Nevis His Excellency Mr. Rong-chuan gave the reassurance recently at a ceremony to break ground for the construction of the Nevis Performing Arts and Conference Centre. The project has been funded through a $2milion loan and a $1million grant by his Government.

“We are very honoured and proud to be a part of the Nevis Performance Arts and Conference Centre. I would like to assure you that the government of Republic of China on Taiwan we will work hand in hand with the Government and the people of Nevis for the most urgent need of Nevis. Whatever you think that is for the best of the people, we will come to work together with you,” he said.

The Ambassador used the occasion to compliment the NIA for its efforts to preserve the island’s culture and explained that his country had seen the need to preserve the culture of its people. He said they too had recognised that culture formed the backbone of a society and had gone to great lengths to its culture in every province of China. 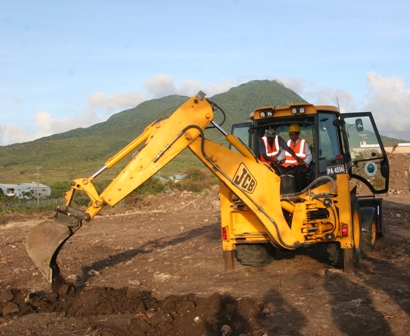