CHARLESTOWN NEVIS (March 12, 2010) — A financial gift to the Social Services Department Single Parent Group on Nevis from the St. Kitts and Nevis Bar Association, has been hailed as one which will touch the lives of single parents and children throughout the island.

Mrs. Ronda Williams the Group’s representative, made that announcement on Tuesday at the High Court Building in Charlestown, when members of the Association presented the Group with a cheque of $10,000 from their recent fund raising activities.

“This donation will undoubtedly touch the lives of our single parents and children throughout the various communities on Nevis. We will be able to do more. That does not imply that our fund raising stops, this initiative only encourages us to continue what we are doing,” a thankful Mrs. Williams said.

Director of the Department Ms. Sandra Maynard said the gift came at a time when the Group was planning its activities for the year and was seeking opportunities for sponsorship.

“These are difficult economic times but I am sure the parents themselves would agree, that even in the best of times, the support of groups and organisations is much needed for them to be able to realise the general goal of the group, to positively impact not only its members but also contribute to the educational, social and economic well being of as many single parents as s possible on the island,” she said.

Meantime, Senior Counsel and Vice President of the SKN Bar Association Mr. Theodore Hobson who along with Junior Lawyer Ms. Dahlia Joseph made the presentation on behalf of the Association said the Group was one of two organisations that had received equal parts of $20,000 raised from a pre Christmas Gala Dinner and Dance at the Marriot Hotel in December. 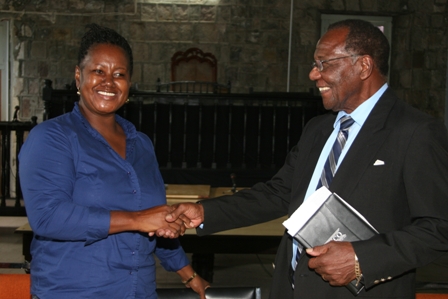 He explained that the fund raising efforts was part of the St. Kitts and Nevis Committee, one of four sub committees set up by the Association under the Presidency of Mr. Charles Wilkin in its quest to revive the organisation.

In addition to the financial donation, Mr. Hobson further noted that it was agreed by the SKN Committee that Ms. Joseph would also be attached to the Single Parent’s Group to lend any legal advice that would be required.

The Social Services Department Single Parent Group, is a support group comprised of a team of women who established themselves to work together for the development of single parents and children.

They have strived to work towards the welfare and advancement of persons in the group who would in turn motivate and enhance the lives of single parents in the broader community.

The Group was the brainchild of Ms. Maynard was formed over five years ago through the Department of Social Services.

Members gather every third Monday at the Department’s offices on Government Road to discuss issues relevant to their role as single parents. They also organise and participate in cooking classes, educational sessions for single parents in the community and engage in fund raising activities.

With funds raised to date the Group has engaged in a number of successful single parent workshops, made contributions to the Health Centres, Paediatric Ward at the Alexandra Hospital and assisted needy students of single parents, with the support of the Department of Social Services. 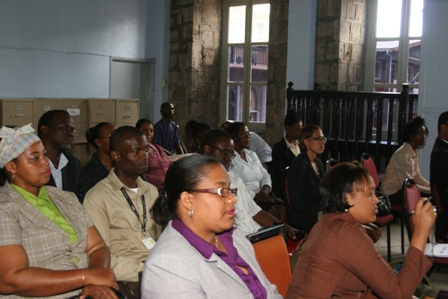