(L-R) Minister of Agriculture on Nevis Hon. Robelto Hector with Food Technologists Ms. Carol Tarradath and Ms. Ahliya Gobin from the Trinidad based Caribbean Industrial Research Institute (CARIRI), both Facilitators for a workshop for Agro Processors on Nevis

CHARLESTOWN NEVIS (March 16, 2010) — Minister of Agriculture in the Nevis Island Administration (NIA) Hon. Robelto Hector, called on agro processors on the island to take advantage of a training workshop he said would enhance their skills and prepare them for entry into the regional market.

Mr. Hector was at the time delivering remarks at the small but significant ceremony to mark the launch of a one week training workshop from March 15th, on the General Manufacturing Practices to Agro Processing. Facilitators for the course are Ms. Ahliya Gobin and Ms. Carol Tarradath, Food Technologists from the Trinidad based Caribbean Industrial Research Institute (CARIRI).

The Minister pointed to the export potential of the agro processing industry and also the importance for the agro processors on Nevis to impart the added knowledge they would receive as a result of the training funded by the NIA and the Caribbean Development Bank.

“Our second stage would have to be the export potential and to make sure that as Nevisians we are able to have something on the regional scene and I think agro processing presents that opportunity for us as a small island to create employment, generate foreign exchange and make sure that we have a business that is thriving…

“This is an opportunity for you [participants] to learn something and for you to impart your knowledge,” he said.

The Minister reminded the participants of the NIA’s continued commitment to the agro processing industry which he said was a small sector that could provide an alternative source of employment.

“I am asking you not to see the industry as part of your home, it is high time we start looking at expansion moving from our homes and getting into the regional market,” he said. 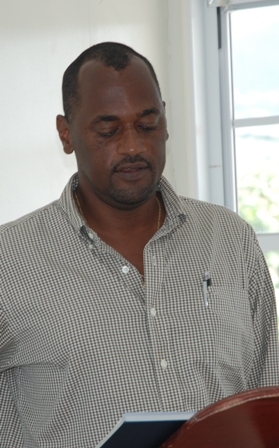 Permanent Secretary in the Ministry of Agriculture Dr. Kelvin Daly spoke of the NIA’s continued commitment to the Agro Processors on Nevis. He said the new Agro Processing facility at Prospect where the workshop is being held, was a public private partnership with the Agro Processors and the NIA.

According to Dr. Daly, the project had fallen behind schedule due to monetary constraints. However, Government’s commitment so far had been about of $1million which was spent on infrastructure, the building, land, equipment and labour.

Dr. Daly told the participants though they had, had extensive training the importance of food safety and handling could never be over emphasised. However the Ministry had concerns with maintaining standards of health and quality and had organised the workshop to ensure that products were safe and consistent in quality for local and regional consumers.

He said the Agro Processors would receive added benefits from the workshop with regard to empowerment.

“The investment is to empower you; social empowerment, and economic empowerment. So we are hoping the next leap of course logically is to move into export of a quality product, well packaged and well presented that will bear more money for you and the persons who are supplying the materials to you will be more empowered also.

“The issue of food security, food self sufficiency is also very important to us. As we can see from the world …persons are now looking inward to develop their own resources and this is another opportunity for us to look in that direction, look inwards. By presenting ourselves inward, we then have the potential to move outward,” he said. 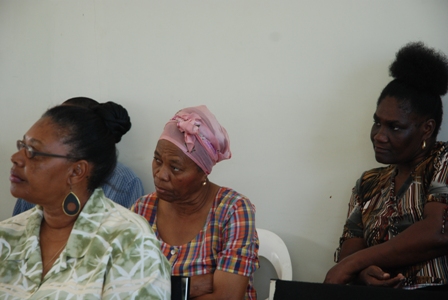