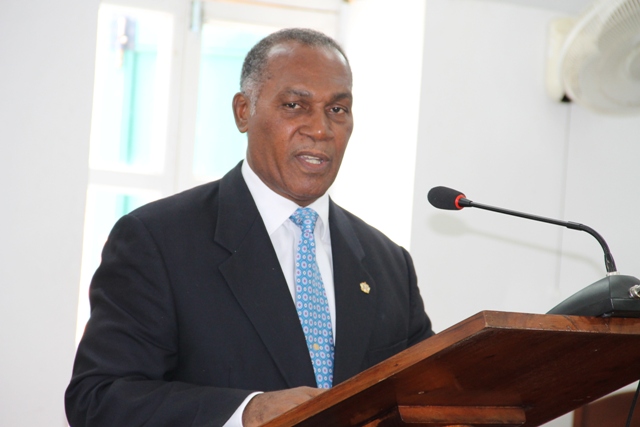 Premier of Nevis and Minister of Finance in the Nevis Island Administration making his presentation at a sitting of the Nevis Island Assembly on June 12, 2014
NIA CHARLESTOWN NEVIS (June 13, 2014) –The Nevis International Banking Ordinance 2014,received safe passage in the Nevis Island Assembly on June 12, 2014, at a sitting which commenced just after 10 a.m. and concluded at 7:15 p.m. The Ordinance replaces the Nevis Offshore Banking Ordinance Cap. 7.05., a key piece of legislation which governs offshore banking in the jurisdiction.
The new legislation, which will strengthen legislation dealing with international banking on the island, was tabled by Premier of Nevis and Minister of Finance in the Nevis Island Administration (NIA) Hon. Vance Amory. He gave a detailed explanation for the establishment of the new ordinance.
“When we look back at the Bill which is being repealed by this new Bill we have brought this morning, we recognised as we began to expand the Nevis Jurisdiction as an international financial services centre, that we should have, as part of that jurisdiction’s offerings and potential, a banking ordinance to have established banks to support the industry.
“It was to enable us to have that diversification so that the companies which were established here under the Nevis Business Corporation Ordinance which was passed in 1984 and subsequent bits of legislation… Those entities and persons using this jurisdiction, ought to have had the possibility of having their accounts held in a bank here in Nevis.So we passed that legislation.
“Unfortunately, it was at the point when we were looking at some significant restrictions and we thought that we would pass the legislation to establish the International Banking Industry but that any such bank which was established, would be a subsidiary of an established Class A bank,” he said.
Mr. Amory explained that at that time, the reason for that thinking was to ensure that the established Class A bank would have its own regulatory framework so that the international “offshore bank” would have internal regulatory functions that would govern its operations. However, things did not turn out as intended.
“On the face of it, that seemed quite plausible but it subsequently turned out that we were experiencing difficulty attracting the kind of established international banks to Nevis or having difficulty, as well, getting those which were here like the Barclays and Scotia Banks and so on, to establish an international bank under their licence.
“It meant that the whole objective and the purpose of the legislation was stymied and it in fact frustrated the whole objective of having that bit of legalisation. The only bank which has established a subsidiary to conduct international or offshore banking was The Bank of Nevis [Limited] and I think they are to be commended for having taken that step,” he said.
Mr. Amory expressed the view, that as a result, he was convinced Nevis had set itself back in that area.
“Based on their operation of that international bank, The Bank of Nevis International, we have had no major scandals, if I may use that word, because that is the fear which seem to have consumed the minds of those who were objecting to having established stand-alone international banking in Nevis and I believe, that we perhaps set ourselves back because we allowed external forces and external influences to govern what we feel are the areas of jurisdiction of the Nevis Island Administration.
“I think it is time that we place that fairly and squarely on the table because in the same way that we have had Nevis corporations and Nevis LLCs and Nevis trusts standing the test of time under the legislative framework of the Nevis Island Administration, I believe and I think the NRP Administration which began the process of finally dealing with the amendments after discussions with practitioners, who were struggling to have their clients establish bank accounts, I think we are on the right track and today we have come to ensure that we no longer have that timidity, that fear of utilising the authority which we have given by our Constitution,” he said. 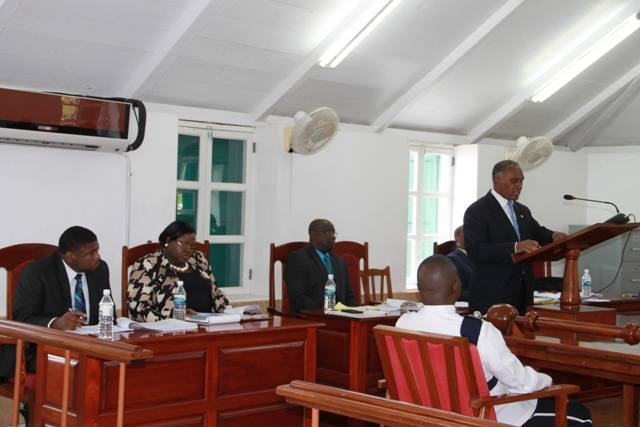 Notwithstanding, Mr. Amory indicated that now that there was a better understanding, the need for the type of fear which prevailed in the past should be non-existent under the new legislation.
“The only fear which we need to have, is the fear of not complying with the legislation which sets out very clearly how these international banks will be operating; how they will be set up; how they will be regulated and this makes provision for all of the other incidents which could flow from the establishment of this plan.
“So today we have come with this new legislation and it is as a result of significant discussion and after the 5th of March we met individually with the Legal Department, with the members of the Finance Department, members of the Financial Services practitioners so that we could craft and have brought to this House an ordinance which meets the objective we have set ourselves,” he said