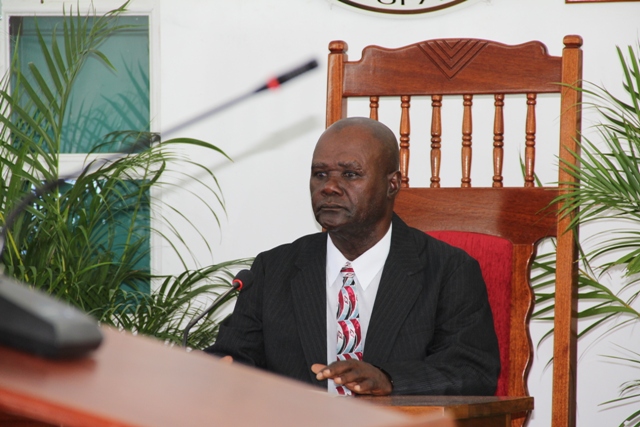 President of the Nevis Island Assembly Hon. Farrell Smithen (file photo)
NIA CHARLESTOWN NEVIS (June 16, 2014) — The Nevis Island Administration (NIA) got the green light from the Nevis Island Assembly to regularise its borrowing ability through overdraft facilities at two local financial institutions, when two Resolutions were approved at a sitting of the Assembly on June 12, 2014.
to the Resolutions under the authority of section 49 of the Finance Administration Act No. 13 of 2007, provisions were made for the NIA to borrow money for current requirements from a bank, any other financial institution or other entity by means of advances to an amount that did not exceed in the aggregate the sum specified in the resolution.
The Resolutions also noted that the Minister of Finance considered it necessary to borrow by means of an overdraft facility from the St. Kitts Nevis Anguilla National Bank Limited “an amount not exceeding in aggregate the sum of $50,000,000.00”  and in the other instance at the Bank of Nevis Limited not exceeding the aggregate sum of  $2,000,000.00.
Both Resolutions will be effective for a period of 12 months and the power to borrow could be exercised by means of fluctuating overdraft, treasury bills or other similar means.