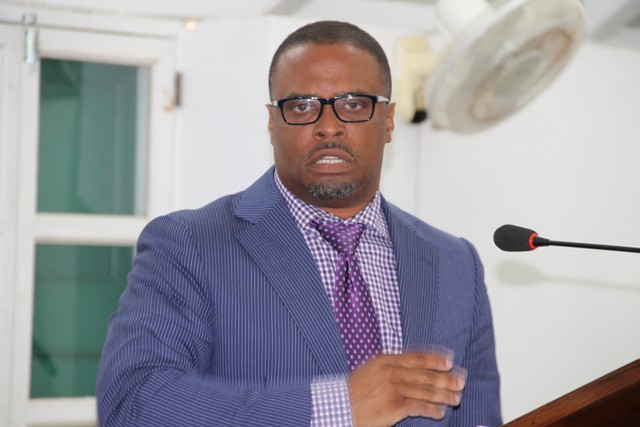 Hon. Mark Brantley Deputy Premier of Nevis and Minister of Health at a sitting of the Nevis Island Assembly (file photo)
NIA CHARLESTOWN NEVIS (December 19, 2016) — The Nevis Island Administration (NIA) plans to continue expanding the services offered at the Alexandra Hospital once work, which is expected to commence on the physical plant in 2017, is completed.
Deputy Premier of Nevis and Minister of Health Hon. Mark Brantley said at a recent sitting of the Nevis Island Assembly, that the steel frame for the hospital’s expansion is expected to be installed in January 2017 followed by a construction period of 18 to 24 months.
The Health Minister urged the public to be tolerant with temporary measures including relocations and diversions that will be taken to facilitate works.
“There would have to be a temporary location of services including the operating theatre, the main kitchen as well as supporting kitchens and we will have to block off certain areas, relocate certain wards and we are asking for the general public’s support in the circumstances,” he said.
However, Mr. Brantley announced that work would not only commence at the Alexandra Hospital but also at health centres.
“We will shortly commence works at the Charlestown Health Centre, as well as the expansion to the Brown Hill Health Centre and renovations at the Butlers Health Centre.
“Improvements to the latter two will be specific to environmental health,” he said.
Mr. Brantley explained that environmental health officers didn’t have physical offices at the Brown Hill and Butlers Health Centres but that would be rectified after the renovations because the Administration values the critical role of the Environmental Health Unit.
They were the only two out of sic health centres on the island without physical offices for the environmental health officers.
Work at the Brown Hill Health Centre will also include a Water Quality Monitoring Laboratory.