Acting Matron at the Alexandra Hospital Jessica Scarborough, Deputy Premier and Minster of Health in the Nevis Island Administration (NIA), Hon. Mark Brantley and Permanent Secretary in the Ministry of Health on Nevis Nicole Slack-Liburd observing the renovations done to the Alexandra Hospital during a tour of the hospital on July 15, 2016
NIA CHARLESTOWN (JULY 18, 2016) – Deputy Premier and Minster of Health in the Nevis Island Administration (NIA), Hon. Mark Brantley, reiterated the Administration’s commitment to improving healthcare for the people of Nevis.
Mr. Brantley, made the comment at the end of a tour at the Alexandra Hospital, on July 15, 2016, to review renovation works on the island’s main health care facility which commenced six months ago.
“We are slowly improving the various facets of the service we provide here at the hospital. This is our main facility and so we continue to do that. I want to pledge the continued support of the Administration.
“This is part of an on-going commitment to the healthcare system generally. I feel the public will see that these efforts are being systematically rolled out as we are trying to ensure that the people of Nevis, those who live here, those who call here home, have the best possible care that we can offer,” he said.
Mr. Brantley stated that while the improvements made to the hospital is a process that could take some time, he assured the public that the works will continue. 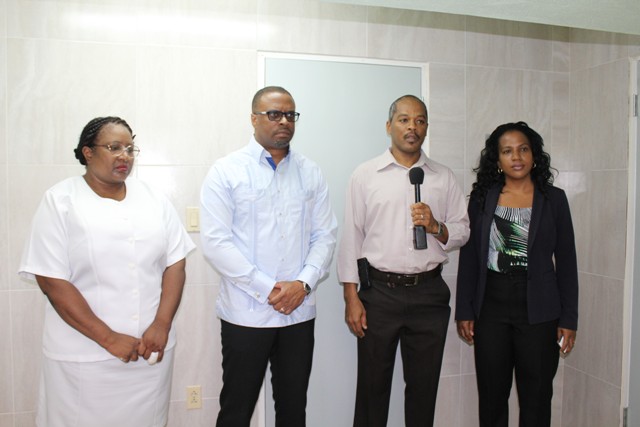 “It is a process, it takes time but I think we would want to reassure the Nevisian public and those who use our healthcare facilities, that Alexandra is being improved overtime and we would hope, that this is not the last but certainly the first in a succession of these types of interventions,” he said.
Hospital Administrator Gary Pemberton who was also present, explained that renovations were also made at the mortuary at a cost of EC$100 000.
He stated that the improvements made to the morgue, allows for autopsies to be conducted at the Alexandra Hospital, thereby minimizing the cost instead of sourcing the service from private funeral homes.
Also present at the tour was Permanent Secretary in the Ministry of Health Nicole Slack-Liburd and Acting Matron at the Alexandra Hospital Jessica Scarborough.