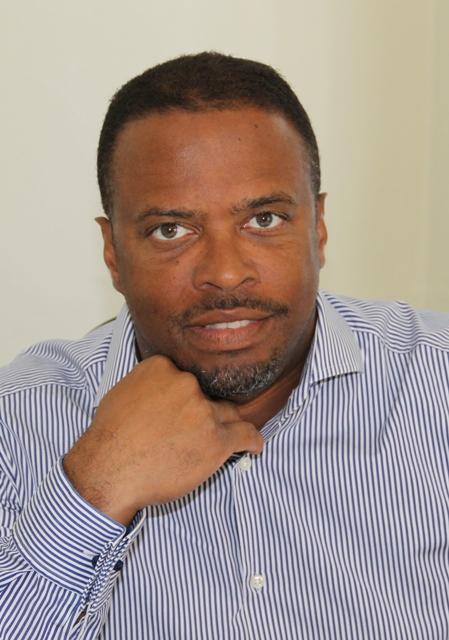 Deputy Premier of Nevis and Minister responsible for Information Hon. Mark Brantley at his Bath plain office on January 26, 2015

NIA CHARLESTOWN NEVIS (January 26, 2015) — Take it and grab it with both hands, was the advice given by Minister responsible for Information in the Nevis Island Administration (NIA) Hon. Mark Brantley to young people, particularly students, urging them to take advantage of scholarship opportunities available for study in Taiwan.

Mr. Brantley’s encouragement came when he spoke to the Department of Information at his Bath Hotel office on January 26, 2015. He said persons on Nevis had not been taking advantage of the scholarships for study in Taiwan.

The Minister noted that the matter of scholarships was one that he was passionate about since he had benefited from scholarships in the past and understood the strain that student loans could cause for parents, families and students.

“Recently we became aware that the Taiwanese were again, through their offices, were offering a large number of scholarships and we have had the complaint that not enough Nevisians are applying.

“We have heard the argument from young people that Taiwan is too far and they don’t want to go so far. My advice to them is to take it, grab it with both hands. It is a free education and with that education you can do anything and go anywhere,” he said.

According to Mr. Brantley, the reality was that education is and continued to be the only proven method to lift oneself out of poverty and there were many young people on Nevis from some families that did not have a university graduate.

The Information Minister explained that the Administration was trying but didn’t have the resources to send every deserving student off to study and for that reason was asking people to take advantage of the opportunities because it was his responsibility to do so.

He stated that there were available scholarships in a number of areas among them tourism, media, broadcasting, engineering, medicine, business administration and agriculture.

“They have courses that go to the PhD level, the Masters level, they have MBAs and they have bachelor degree programmes as well and the beauty about it all is it’s free, completely free to the student,” he said

Mr. Brantley explained that there was also an added bonus which came with studying in Taiwan.

“You get an opportunity to learn a foreign language which is Mandarin and we understand with the emergence of China as a world super power, that access to that language and the ability to speak that language will be very important for our young people going forward.

Mr. Brantley noted that anyone who was interested in applying for a scholarship to pursue studies in Taiwan could visit Julie Williams at the Ministry of Tourism, Permanent Secretary in the Premier’s Ministry Wakely Daniel, Cabinet Secretary Stedmond Tross or any of his Cabinet colleagues.

The Information Minister also used the opportunity to shed light on other scholarship opportunities available in the area of agriculture at Earth University in Costa Rica. He stated that two students had already left for study at that facility in 2014 and there were openings for one for 2015 and another for the next five years.

“If there are any young people out there who want to pursue a business, a future in agriculture, this is, again, a tremendous opportunity,” he said.

Mr. Brantley assured that as scholarships became available he would disseminate the information and continue to encourage the young people of Nevis to take advantage of those opportunities.