Premier of Nevis Hon. Vance Amory interacts with Jayden Dore, a student of the Nevis International Secondary School at his Bath Hotel office on April 19, 2016, after Jayden’s presentation of a desalination proposal for Nevis, while Junior Minister of Youth and Sports Hon. Hazel Brandy-Williams looks on
NIA CHARLESTOWN NEVIS (APRIL 20, 2016) — Jayden Dore, a student of the Nevis International Secondary School, presented a “Water is Life!” Desalination Proposal to Premier of Nevis Hon. Vance Amory at his Bath Hotel office on April 19, 2016, which he says has the ability to assist the island to provide clean drinkable water and at the same time provide green energy.
Dore who was accompanied by his mother Letisha Dore, said he was driven to conceptualise the idea while doing some research and came upon the desalination process. He thought it a worthy proposal for the island if it faces a drought.
“Desalination is also very clean and I’ve heard of other islands and other countries doing it so I figured ‘Why shouldn’t we?’” he said, noting that the overriding intension is to assist with the future production of water and clean energy for Nevis.
Jayden believes that although desalination is a costly process, funding from friendly countries or donor agencies could help defray cost for that type of project.
Meantime, Mr. Amory, who is also the Minister of Education, listened to the presentation with keen interest and commended the 1st Form student for his interest in the future of Nevis.
“I appreciate how you are beginning to think about how you can help the future sustainability of energy and also of having water which as your logo says “Water is life; Water the elixir of life” because without water you die.
“It is an essential service, an essential product, an essential element and I want to commend you for that. I want to also encourage you to think and think big as well. I want to thank you for coming to talk to us about it and I wish you well,” he said.
Mr. Amory urged Jayden to continue to think and dream and told him whenever he has an idea he should talk to his teachers and his mother about them.
The Premier promised that he would pass on the proposal to the relevant minister in the Nevis Island Administration for scrutiny.
Mr. Amory said the idea of desalination is not far-fetched since it is a process utilised in neighbouring islands hit by drought.
In the meantime, he said Nevis continues to be fortunate where water production is concerned but unreliable rainfall could lead to drought and the idea of desalination in the long-term would be of benefit to Nevis.
“We would have to spend money to get it done. So we would have to look at all of those variables to get the result but the idea is clearly a very good idea and we need to look at it,” he said.
Mr. Amory pointed to St. Kitts where the issue of water production is different from Nevis and officials there have begun to explore possible solutions. 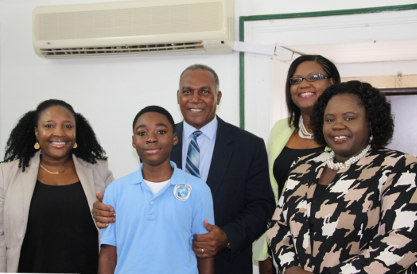 “I know in St. Kitts they are also looking because they have a bit more serious situation than we have and that’s one of the ideas which has come up to look at reverse osmosis, desalination as a possible source of water.
“We are fortunate we haven’t had the shortage yet…but if we have all the hotels we are looking at coming on to construction we will need to certainly look immediately at how we respond to provide water for them,” he said.
Junior Minister of Youth and Sports Hon. Hazel Brandy-Williams who introduced Jayden and his proposal to Mr. Amory said when it was brought to her attention by his mother, she was particularly impressed with the thought that the proposal offers energy and water production for the price of one.
Also present was Coordinator of Youth Development Zahnela Claxton.