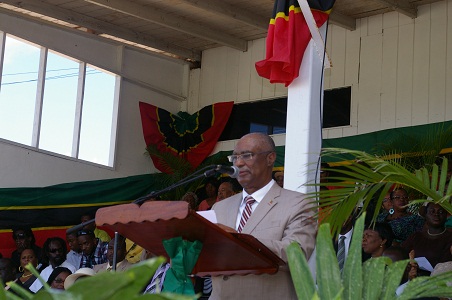 Premier of Nevis, Hon. Joseph Parry delivering his address during the 29th Independence Ceremony
Charlestown Nevis (Wednesday September 19, 2012) — Nevis Premier, the Hon. Joseph Parry announced Wednesday morning during his address at the 29thIndependence Anniversary Ceremony that “the island of Nevis is not broke, in spite of what one might hear or what some may wish.”
Premier Parry, who also holds the Ministry of Finance portfolio, received a rousing applause from the crowd that had gathered at the Elquemedo Willett Park in Stoney Grove, for the ceremony.

The Premier told the attentive audience that he did not ask any person to talk on his behalf at the recently held Financial Consultation in St. Kitts to which his Financial Secretary, Mr. Laurie Laurence, spoke on the challenging economic times that the island of Nevis has been facing, information that has elicited misinformation from certain persons to the effect that Nevis is “bankrupt”.

The Hon. Joseph Parry said that the global economy has many countries facing difficult financial periods and some countries here in the region have been unable to pay their civil servants or pay them late, but according to the Premier, “Nevis has been able to pay government workers and pay them on time”.

He said that Nevis is obligated to be part of a serious austerity program, not only to survive this recession, the worst since 1929, but to place the island’s economy in a position to absorb and survive shocks in the future.

“This is a work in progress,” stated Premier Parry. “It will take time, but the government is making steady progress.”

He noted that the government meets payments on the domestic debt. He added: “When the restructuring is complete we would be in a position to cover salaries the domestic debt and other re-current obligations more easily.”

The question the Premier asked was, “how do we continue to drive and expand the economy and how do we get funds for capital expansion”?

He informed participants that no longer can Nevis rely on grants and loans because no financial institutions will extend loans after the several rounds of haircuts and the insisting by the International Monetary Fund (IMF) that Nevis balance their budget, take on capital funded projects and do it within three years.

According to Premier Parry, two options have been brought up to help ease the financial challenges in Nevis but the Premier has said a firm “NO” to both. The first has been to trim the government service and the second is to re-introduce Personal Income Tax.

“The consequence of trimming the civil service will be that people would not be able to pay rent, pay their mortgage, feed their children, meet certain obligations and the economy will fall into a downward spiral,” observed Hon. Parry.

“For me to re-introduce Personal Income Tax would be cruel and short sighted in these challenging times as the people of Nevis would have less to meet their needs and a fall-off in demand will also cause the economy to shrink.”

He said that his Nevis Reformation Party-led Administration has pursued the path of growth through private sector development, both local and foreign.

The Premier identified local investors, Mr. Deon Daniel, Mr. Greg Hardtman, the Four Seasons Resort Estates and Mr. Analdo Chiverton, who between them all have created over 200 jobs in the last six months. He also mention Brown Hill Communications and congratulated them on behalf of the Administration for creating 70 jobs by the end of October.

As part of the growth effort, an Oil Storage Plant is to be located in the Pembroke area. “For those with raised eyebrows, be informed that St. Lucia, St. Eustatius and St. Croix all have a similar facility,”the Premier said.

Health tourism will receive a boost in Nevis with the addition of a Cosmetology Centre, a Urology Centre and a Renal Centre with a Dialysis Unit.

“The creation of jobs and much investment in the economy through the private sector, means more economic growth and tangible revenue for the island of Nevis,” Premier Parry proudly stated.