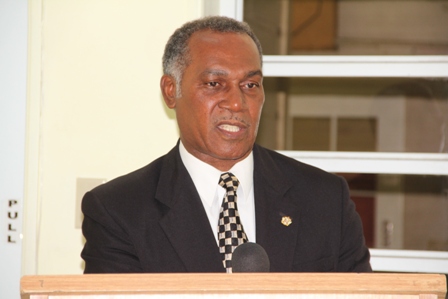 Minister of Education and Premier of Nevis Hon. Vance Amory delivering remarks at a handing over ceremony at the Department of Education, Marion Heights on December 12, 2013
NIA CHARLESTOWN NEVIS (DECEMBER 13, 2013) – Minister of Education and Premier of Nevis Hon. Vance Amory during a ceremony at the Department of Education at Marion Heights on December 12, 2013, announced that for the 2014 Budget for the island of Nevis, the Nevis Island Administration (NIA) will be making provisions for two persons interested in studying in subject areas of particular interest to the Administration, free of cost.
The announcement came at the handing over ceremony in which the Royal Bank of Canada (RBC) RBTT was named as sponsors of the Department of Education’s first Math Bowl Competition in early 2014.
“Let me announce that we will be announcing in the Budget next week, as part of our priority for training, that we are prepared, as a government, to support two students or teachers who want to study Mathematics in September. We have to take it seriously.
“We also have a similar commitment for teachers or students who want to do English Language and Literature. We have to go back to the foundational aspects of education and similarly for Science, whether it is in Physics, General Science or Chemistry. These are things which I feel are critical and we want to support persons who would want to take up that challenge, to come back to break the cycle and have an array of positive outlook on education in those areas. So there is the offer; it is for those who hear and those who want to take it and I’m going to say it is free,” he said.
Also, during his remarks, Mr. Amory described the new Math Bowl Competition as revolutionary and expressed gratitude towards the sponsors of the upcoming contest.
“It’s very important that we are here for this very simple but I think revolutionary ceremony. I want to thank Mrs. Sutton and RBC/RBTT for their commitment to ensure that we break the jinx surrounding Mathematics in Nevis.
“I think if we can break it here because we are a smaller community, we might be exporting Maths teachers and Maths students throughout the Caribbean…I think this attempt by the Ministry of Education with the full support of RBC/RBTT will go a long way to breaking that cycle,” he said.
Premier Amory closed his remarks and registered his belief that with the launch of the new competition, students would excel in education.
“We want to tackle this problem head-on and I do believe that we can nick this problem. We are beginning here in Nevis…and with Mrs. Fahie’s help, the Education Department, the Ministry of Education and the leadership from the schools, I am convinced that we can make a turnaround in the way our students see Math and the way they excel at Mathematics…
“I want to thank you Mrs. Sutton, thank you Mrs. Fahie, Permanent Secretary and other Education Officers and you do have my full support,” he said.