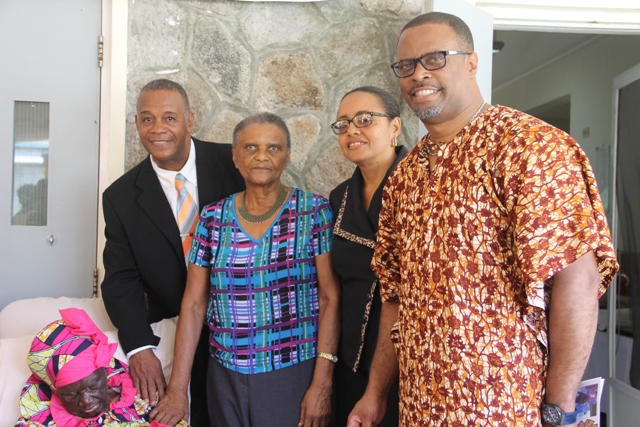 Senator Wendy Phipps, Minister of State in the Ministry of Health in the Federal Government (second from right) with the Federation’s oldest living centenarian Celian “Martin” Powell at her 106th birthday celebration on January 19, 2018, at the Flamboyant Nursing Home. She is flanked by (l-r) Hon Eric Evelyn Minister of Community Development on Nevis, Her Honour Mrs. Marjory Morton, Acting Deputy Governor General and Hon. Mark Brantley, Premier of Nevis

Senator Wendy Phipps, Minister of State in the Ministry of Health in the Federal Government made the announcement while extending birthday greetings to Ms. Celian “Martin” Powell, the Federation’s oldest living centenarian, when she celebrated her 106th birthday on January 19, 2018, at the Flamboyant Nursing Home in Charlestown.

“Our statistics do confirm that per capita that Gingerland does have the highest number of centenarians in the Federation. The total count as of today is about 18. We just lost one, I think it was a few days ago, Mr. James Pemberton, a Nevisian who happens to live in St. Kitts and he died at the age of 101,” she said.

The Senator noted that she had spoken to Mr. Pemberton some months ago when he told her he was only living in St. Kitts but was a Nevis man from Gingerland.

She said he told her when he was born he almost died and his mother was told to leave him at the hospital. Instead she took him home and nursed him to health and he survived and lived to 101.

Ms. Phipps said in recent times, males in St. Kitts and Nevis were attaining the age of 100 and all of them with the exception of two, Brother Bailey from Saddlers who is 101 and Mr. Samuel Depusior of Challengers who is 102, they are all of Nevisian heritage.

On a light note, the senator quoted local calypsonian Konris Maynard and chuckled “There must be something in the water.”