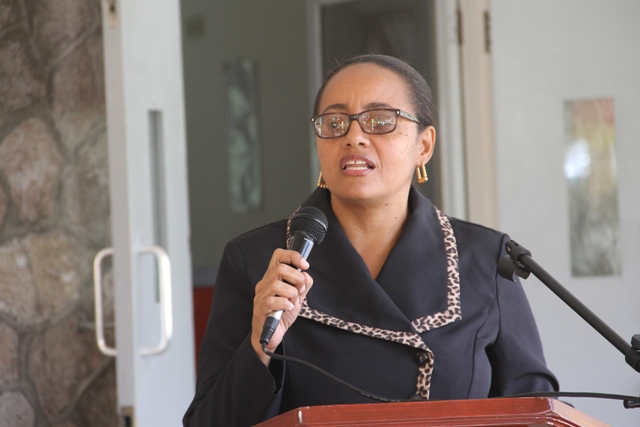 Senator Wendy Phipps, Minister of State in the Ministry of Health in the Federal Government at the 106th birthday celebration of Ms. Celian “Martin” Powell, the Federation’s eldest living centenarian on January 19, 2018

NIA CHARLESTOWN NEVIS (January 23, 2018) — St. Kitts and Nevis may have the highest percentage of centenarians in the Caribbean Community (CARICOM).

Senator Wendy Phipps, Minister of State in the Ministry of Health in the Federal Government who was at a 106th birthday celebration on Nevis on January 19, 2018, believes evolving human development in the Federation over the years is the reason for the achievement.

“We have had great strides in terms of our advancement in public health, our care of the elderly; the way we look at life; the holistic development of our people, including, but not limited to, our spiritual development and it also speaks to our ability to maintain the traditional African heritage as it relates to people or the extended family looking after their own,” she said.

Minister Phipps said the achievement is something to be proud of and one which sends a message of how far we have come as a people, how far human development has evolved as a people.

“We are no longer suffering from a lot of the traditional diseases that would have been public health challenges for countries, especially African territories, that are still very much third world countries that are trying to graduate to first world status,” she said.

The health minister expressed gratitude for the senior care facilities in the Federation. There are two on Nevis and five on St. Kitts, three of which are in Sandy Point.

Ms. Phipps said the senior care facilities are indicative that seniors are cared for by their family and well-wishers and are not left to the care of state agencies.

She believes that the level of care and concern for the island’s seniors, contributes to the overall productive and nurturing environment that has allowed them to celebrate life beyond 100.