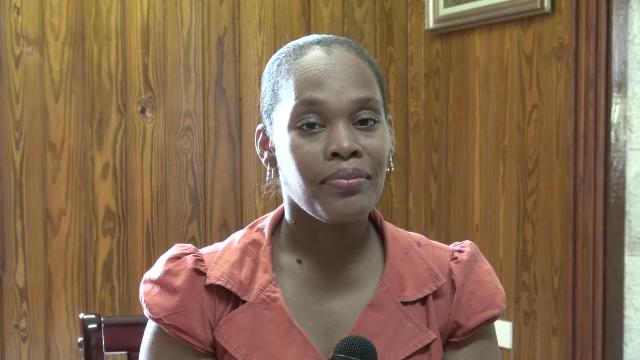 General Manager of the Nevis Performing Arts Centre (NEPAC) Deslyn Williams-Johnson
NIA CHARLESTOWN NEVIS (May 15, 2014) — General Manager of the Nevis Performing Arts Centre (NEPAC) Deslyn Williams-Johnson issued a call to singers and vocalists on Nevis interested in Afro Caribbean, Reggae, Soca and Calypso music to be a part of the first musical production which will form part of the Culturama 40 (C40) calendar of events.
In a brief interview with the Department of Information on May 13, 2014, Williams noted that the vibrant production, the first of its kind created by NEPAC, was entitled “Musical Cornucopia” and entailed a mixture of music genres.
“We are currently gearing up for our Culturama 40 production titled “Musical Cornucopia” which is really an eclectic mix of different genres of music. It will be a very vibrant performance featuring dances, as well. The entire NEPAC ensemble will be performing.
“At this juncture, we want to invite persons from within the community to be a part of this production, specifically vocalists or singers who would be interested in lending their voice to this production. We want to invite persons out to a meeting practise on Monday May 19th at 6 p.m. at NEPAC. Moving forward from that date, rehearsal dates would be set and preparations will go forward for this production,” she said.
Williams-Johnson added that the work on the production had already commenced but focus had been on other areas.
“We’ve already begun but we were focusing on the other areas of dance and drama, now we are ready for the singers and we are ready to bring that production to the people of Nevis for Culturama 40.
“The genres of music that would be featured would be Afro Caribbean music, Reggae, Soca and Calypso. So those of you who are interested in those genres of music, this production is the place for you,” she said.
According to Williams-Johnson, “Musical Cornucopia” would be a two-hour-long production worth seeing and she urged members of the public to be a part of it when it is staged on July 28 and repeated on August 07, 2014, at NEPAC from 8 p.m.
“I am talking about a really fantastic performance and we want the people of Nevis who are interested in this to come on out and be a part of it,” she said.